WITH the identities of Thomas Bjorn's Ryder Cup automaric qualifiers now known, life continues on the European Tour, with Matt Fitzpatrick returning to the glorious Crans Sur Sierre to defend his Omega European Masters title. If there is a a more spectacular venue anywhere on the globe it is difficult to imagine where it might be. And with the thin air in the Alps, the players are able to hit the ball even further than ever, raising the possibility that this may be the most likely venue for somebody to finally shoot a 59. It is hard to believe that the feat has been achieved 10 times on the PGA Tour, along with Jim Furyk’s memorable 58, and yet we still wait for the first sub-60 round on this side of the Atlantic.

There are several reasons. PGA Tour courses always boast perfectly manicured greens that have been heavily watered - it means that the Americans play target golf most weeks, while their European counterparts face different challenges every time they tee the ball up. But one thing is for certain - whoever wins the latest editions of the European Masters is going to have to go low to do so. It was won in 2011 and 2013 by Thomas Bjorn, in 2012 by Richie Ramsay, in 2014 by David Lipsky, in 2015 by Danny Willett, in 2016 by Alex Noren and last year by Yorkshire’s Fitzpatrick.

Fitzpatrick won in thrilling fashion 12 months ago when he carded a final round 64 to force a playoff with Australia’s Scott Hend. On the first hole of sudden- death, the Englishman calmly converted a difficult par putt to keep his title hopes alive, and after narrow misses for birdie by both Fitzpatrick and Hend on the second extra playoff hole, the duo was headed back to the 18th tee once again. Maintaining his nerve throughout, the Sheffield native found the fairway and green before two putting for par and breaking the deadlock as Hend made bogey following a missed green.

“I’m delighted to announce I’ll be defending my title in Crans Montana,” said Fitzpatrick. “I’m really looking forward to being back and competing there again- it’s going to be a great week.”

Fitzpatrick already has four titles to his credit and will surely be among the favourites. It is getting towards the business end of the season and there will be several players in the field with other things on their mind, namely finding one good week to secure their playing privileges for next year.

The top 60 players in the Race to Dubai standings will take part in the season-ending Dubai World Championship, but there is also the small matter of finishing in the top 110 to avoid having to make a trip back to the dreaded qualifying school. And among those who are uncomfortably close to that number are Scott Jamieson, Nicolas Colsaerts and Romain Wattel, who are just inside the top 110, and the likes of Thongchai Jaidee, David Horsey, Richie Ramsay, Marc Warren, Haydn Porteous and Callum Shinkwin, who are all on the outside looking in. With a good week in Switzerland or one of the other five remaining events in the regular season all of these players can still rescue themselves. But the pressure on each and every one of them is intense. At the end of the season it could all come down to one missed putt that causes somebody to miss the cut. Or, like Eddie Pepperell a couple of years ago it could be a wayward tee shot at the 36th hole when all he had to do to keep his card was make it to the weekend.

Jamieson gave himself a chance of survival with a good week at the Czech Masters. The Scot, who is a former winner, has been here before and admits that it is a horrible experience. But they keep coming back because they all have dreams, they all want to win, and they all believe that they can win.


And who knows? Crans Sur Sierre just might be where it happens. 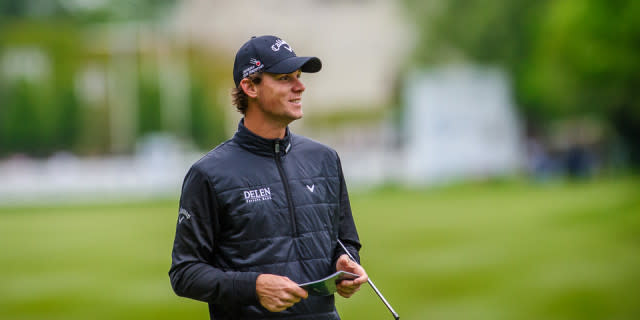 In truth, it is far more likely to be somebody from the upper reaches of the Race to Dubai who walks away with the trophy. Unsurprisingly, there is a superb field, featuring the likes of Danny Willett, Thomas Pieters, Charl Schwartzel, Matt Wallace, Alexander Levy, Paul Dunne, Haotong Li, Kiradech Aphibarnrat and George Coetzee.

Charl Schwartzel. So much talent

Thomas Pieters. Could bring this course to its knees

Danny Willett. Only a matter of time before he wins again

Matt Wallace. Should suit him

Scott Jamieson. Determined to stay on the right side of the 110