Open Farewell to the Normal Man with an Extraordinary Talent

It was the summer of 1974 at Royal Lytham & St. Annes, a 16-year-old boy had fulfilled his childhood ambition by qualifying for the Open Championship. He was a prodigious talent emerging from the fairways of Shropshire, a precocious youngster who had bagged an unexpected practice round that week alongside eventual winner Gary Player.

Alexander Walter Barr Lyle. Or just Sandy. Remember that name. It was the first chapter of a longstanding relationship between player and event. When the 147th Open got under way at 6:35am on Thursday morning at Carnoustie, that lad – now considerably older but retaining the same youthful spark - stepped onto the Angus links carrying the honour to hit the opening tee shot.

Much happened during those intervening four decades.

Open champion of 1985, Lyle began what is set to be his final appearance. Incredibly the 43rd time he has participated in golf’s most historic championship, the last stand for one of life’s true gentlemen who is perhaps the most underappreciated of modern British sporting figures.

The son of Alex, a Scotsman who had ventured south and became resident golf professional at Hawkstone Park, Sandy was quite literally born into the game, living yards away from a course that served as his education for golf and life. Representing England as a schoolboy and amateur, the one-time Walker Cup player made the decision to adopt the heritage of his parents when venturing into the pro game, pragmatically taking advantage of the early access onto the Tartan Tour.

Nonetheless, Lyle is as proud of his Scottish blood as anyone who grew up in the West Midlands can be, retaining a striking home in the heart of the nation at Balquhidder, living among his ‘ain folk’ who embraced him so warmly. The two major triumphs at Royal St. George’s and Augusta National were the inspiration for many a young Scot, including future Champion Golfer of the Year Paul Lawrie. Due to his success and cross-border appeal, Sandy Lyle remains the British game’s most understated trailblazer.

Lifting the Claret Jug at Sandwich saw him become the first home winner since Tony Jacklin. In 1988 he was the first player from the British Isles to win the Masters, a year after stamping his name as the first European to secure the lucrative and burgeoning Tournament Players Championship at Sawgrass, where he later purchased a house. Five Ryder Cups and three European Tour Order of Merits later, the Shropshire Scot was for several years during the 1980s arguably the most gifted player in the game.

Golf came naturally to him. Indeed, in the foreword to Lyle’s autobiography To The Fairway Born, the legendary Seve Ballesteros said: “Sandy was the greatest God-given talent in history. If everyone in the world was playing their best, Sandy would win, and I'd come second.” 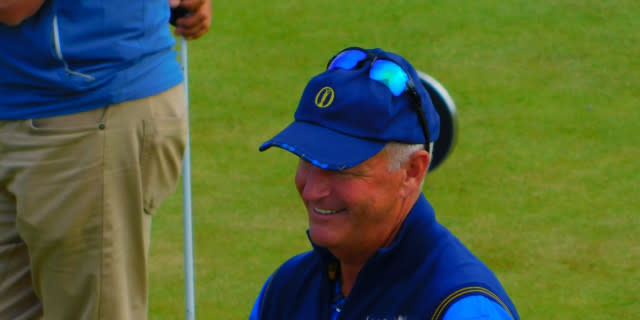 However, the abiding tragedy of Lyle’s career was that his enviable gift deserted him too soon. Aged 34, he claimed his last win on the regular tour at the Volvo Masters in 1992. The years since were punishing, albeit with the occasional reappearance of the magic, including at St. Andrews in 2005 when he was inside the top ten after three rounds. The swing instructors and gurus lined up to help, but none could repair this broken champion. The loss of both Alex and his mother Agnes within months in 1996 was a devastating blow, as he shared in a 2006 interview with the Daily Telegraph.

"The loss of my dad left a deep scar that I feel to this day. He had been at my side since childhood, gently encouraging me on the golf course and quietly instilling his sense of decency and honesty. He had been there at my Open and Masters victories and he had always been there for me during my years of despair, offering guidance and words of wisdom. Even yet, every time I pick up a club I can hear his voice in my ear repeating the mantra, 'Tempo not temper'.

“My dad always used to say, 'Sandy, I don't care what you might or might not achieve over the rest of your life. You've won the Open, you've won the Masters, if I die tomorrow then I will die a very happy man.' I miss dad more than I can say but console myself with the thought that he did just that.”

This most unassuming and genuinely humble of great sportsmen, Lyle once remarked at the size of a crowd that had taken the time to greet him: “I've been in the doldrums with my game so long I thought most people had forgotten me by now.”

Now 60, Lyle – as all the greats have done – was faced with the door shutting on his exemption into the Open, unless he can win the Senior version at St. Andrews or make it through Final Qualifying. But the likelihood is that this was it. The end of an era. The spectators were there to see him tee off on Thursday morning, and they braved the rain at 16:20 on Friday to witness their favourite son cap off his tenure in the championship with a birdie on the fearsome 18th hole at Carnoustie.

What a way to finish for @SandyLyle1 in what is potentially his last Open.

“I was finding it hard to focus on the putt with the all the memories,” Sandy reflected with Sarah Stirk on Sky Sports. “It was very emotional. I saw Tom Watson on the 18th, which was nice, he made the effort to come out towards the tee. I didn’t know if I could get the tee shot away. I was complete mush.

“I was very emotional when I saw Nicklaus finishing at St. Andrews. It puts a lump in your throat, and I think I had a lump in mine on those last two holes today.”

It was a fitting farewell, reminiscent of Jack’s curtain call at the Old Course.

The normal, decent man with an extraordinary ability. The people never did forget him.