Father & son pair Ian and James Fox of Leyland Golf Club won the American Golf Tournament of Champions after two days of competition at the stunning Heritage Le Telfair Golf Club on the beautiful island of Mauritius. Having qualified as winners of the American Golf Family Championship, the duo were superb as the defeated a spectrum of other competitors from across the UK and Ireland.

After day 1 the Foxes lead the field, but only 6 points separated the 5 teams, which left it all to play for in the final round.  An impressive 4 under par round on day 1 from the Scratch and 9 Hole individual pairing of Chris Abbott and Steve Holmes failed to deliver to the same standard on Day 2 leaving the door open for the Ladies pair. They played some fantastic golf over the 36 holes and finished with back to back birdies on 17 and 18 to complete their round and put themselves in real contention as leaders in the Clubhouse.

After a great back 9 from James, the Family pair continued to hold the lead coming into 18 and near perfect shots into the green gave them each 2 putts to win on the final hole.  Both father and son kept their cool under the spotlight of the cameras and sank their putts to take the victory. 15 year old James and his father Ian think that their relationship has been the secret to their success. Ian explained, “I’m quite emotional about our win. It sounds a bit clichéd but we dove-tail nicely, when James went “missing” for 4 holes, I clicked in.” James added, “It’s been fantastic playing with my Dad, he’s my mentor, my caddy & everything I need.”

Daniel Gathercole, Director of Marketing and Communications at American Golf explains, “The spirit that this tournament has been played in is exceptional. I have been so impressed by the camaraderie amongst the competitors and by the standard of play. It’s been a perfect climax to an amazing event season. We really couldn’t have hoped for a more fabulous setting for this event. The golf course is immaculate and Heritage Resorts have been the perfect hosts.” 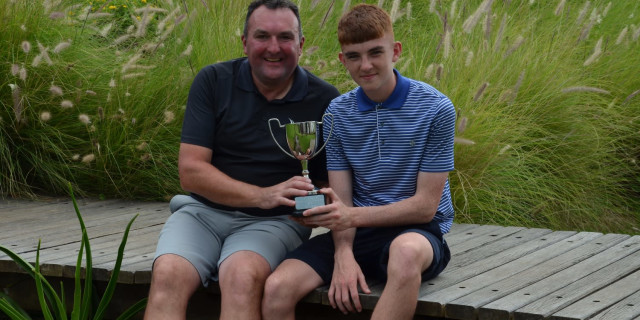 General Manager of Heritage Golf Club, Jonathan Menteath, was delighted to host the event and is looking forward to welcoming Tour stars at the AfraAsia Bank Mauritius Open next month, “We have really enjoyed working with American Golf.  Seeing the players out on the course with the cameras over the last few days has been fantastic and given us a real sense of the excitement to come when the Tour players arrive to play the same course in a few weeks time.”

7,500 golfers from across the UK and Ireland entered the free American Golf Tournaments which culminated in the Tournament of Champions competition on the beautiful island of Mauritius.  This is the fourth year that the company has run these events and Ian, like many of the competitors recommends that everyone should take part, We never expected to do this well, we entered & were excited about the qualifier in June but we never expected to go any further.  I’d tell anyone to put their name down.  Anything can happen.”

As well as taking the trophy and the title, the Fox family were treated to a helicopter ride around the island, which will make for great TV when the programme airs in December. All of the Championship finals will be shown on Sky Golf starting this October and with the quality of golf and fantastic events we expect more people than ever to be registering their interest on www.americangof.co.uk/events for next year.