American Golf brought together qualifers at iconic Ryder Cup venue The Belfry for three days of exciting finals. Eight winners were crowned, with six now moving onto the Heritage Resorts Tournament of Champions in Mauritius.

Following a summer series of 44 free to enter regional qualifying events, golfers from all over the U.K. and Ireland descended on the midlands venue to battle it out for the title in 9 Hole pairs and individual, Family, Scratch, Ladies, Senior, Par 3 and even Adventure Golf Championships! With the title of American Golf National Champion on the line in each category, along with 6 places in the Heritage Resorts Tournament of Champions, competition was fierce. Some fantastic golf was played and incredible sportsmanship shown in conditions that varied from sunshine to rain to torrential rain before eight worthy winners were crowned.

American Golf has championed 9-hole golf for some time and this year’s competition, including the introduction of the individual event, didn’t disappoint. The pairs competition saw Paul Hutton and Howard Burton from Wortley Golf Club claim their win with victory on the 18th hole from Fulford Heath’s Ross Holmes and Scott Nixon.

It was a tight match all the way round with Hutton reflecting after the win, “The guys we were playing got a hole in one when we were one up and it changed the game. It was ebbing and flowing and there was only one hole in it, but we managed to get one up at the right time” 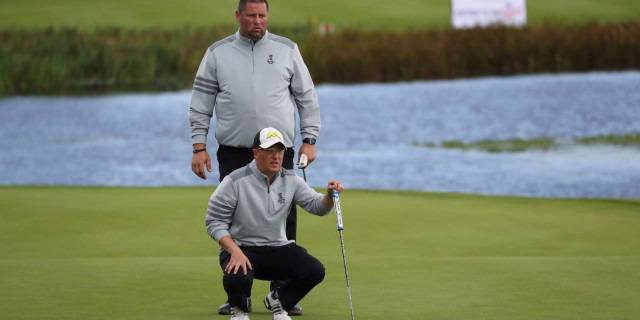 After holing a 2 ft putt on the last to take the title, Burton commented, “I can’t believe I actually managed to get the club on the ball I was shaking so much. I can’t believe I got my first putt to 2 ft, but being on camera all I was thinking was ‘I can miss 2 footers!’”

Upon taking the title Holmes commented, “I played very well. Not as well this afternoon but enough to do the job. It’s been amazing. I’ve met some fantastic people and have been really looked after by everyone at the Belfry and everyone at American Golf.”

Holmes joins Hutton & Burton on the plane to Mauritius for the Heritage Resorts Tournament of Champions, a fact that has him caught in two minds, “I can’t believe it, but my gaffer won’t believe it either because I’ve got no holidays left!” 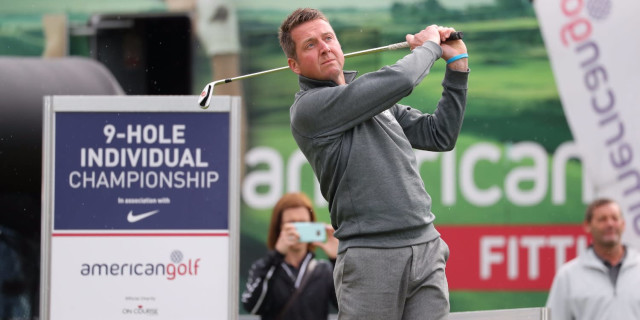 The Ladies’ Championship saw the most emphatic victory of Saturday with Michelle Black and Lisa Duffy of Rochdale G.C. taking a 4 & 3 victory over Orla McGuiness and Kay Farrell from Swords G.C. near Dublin. The Rochdale pairing had played some fantastic golf all through the competition and come the final were in no mood to let up.

“I can’t say we’ve played our best golf in the final but we’ve dug deep and scrapped. We’re good scrappers,“ commented Duffy.  Black confirmed that assessment by adding, “There were some shots I played that I thought ‘Oh no’ and there were some shots that Lisa played that I though the same! But we did play some very good bits in between. It’s amazing what a difference the cameras and the pressure of the event makes. But it’s been a wonderful experience and American Golf have been amazing.”

The Senior Championship saw a first for American Golf, with returning champions Martin Leo and Ian Hendry taking the title for the second year running. The Sussex pairing won 3 & 2 from Niall McDonnell and John Greer of Co.Dublin.

Hendry and Leo were another pair who didn’t feel they brought their best golf to the final round as a little fatigue set in. “It’s a difficult format Matchplay over 9 holes but we played well enough to win,” commented Leo. “We’ve had a good 3 days. It’s a big event here, we’ve played lots of golf and we are Seniors. We’re 60 years plus and he’s a lot older than me as you can see!”

Hendry agreed, admitting that his playing partner shouldered much of the responsibility for their win in the final round, “I’m dreading the TV highlights, because how they could possibly edit out all of my shots. But I did have the winning putt, that’s the most important thing!” 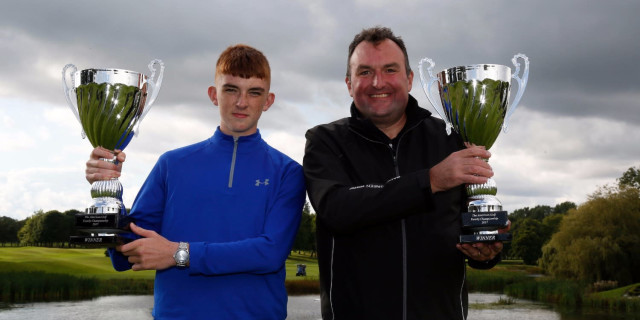 One of the real highlights of the weekend was the Family Championship which saw family members take to the fairways together in search of the title. Father & Son pair Ian and James Fox from Leyland Golf Club came out on top after beating Droitwich brothers Ian and Alan Gandy 3 & 2. This was the first year for the family championship and it quickly became a firm favourite with the competitors and crowds alike.

16 year old James Fox summed up the appeal of this new event when he said, “It was an unreal experience playing with my dad. We always play golf together but it makes this ten times better winning with him.”

Ian followed up by saying, “It’s a cliché but we dovetailed well. He kicked in when he had shots. I holed a putt on the 15th for a half or we’d have been a bit knee knocking coming down the last stretch.” And of the overall experience of the Family Championship Ian concluded, “It’s been fantastic. Everybody’s been really helpful. The staff have been really friendly. You judge a place by the warmth of the staff and we’ve felt it during our 3 days here both from American Golf and the Belfry.”

The best golf of the weekend was unsurprisingly played in the Scratch championship where Chris Abbott from Lutterworth Golf Club capitalised on a fantastic opening round of 4 under to take the inaugural title from Chris Brook of Hinckley Golf Club. Following his great start, Abbott had to dig deep to stay ahead but found enough to take the title. “I’m absolutely delighted. I had a good first round shooting 4 under but the conditions got really tough yesterday afternoon, so 4 over for the second round felt quite good. I didn’t play my best today but thankfully it was just enough to get over the line.” While thrilled with the result, the overall experience provided by American Golf was one that he reflected that he would never forget, “We’ve been treated like royalty by American Golf these past 2 days. We’ve had free range balls, lunch provided, electronic leaderboards, it almost makes you feel like you’re a professional – especially with all the cameras as well!”

The Par 3 Championship came to its head to head conclusion on a specially prepared course over the back 9 of the Brabazon. Over this unique course, Shaun Mason of South Staffs G.C. took the win 4 & 2 from Oxley Park member Paul Stokes. Upon winning the tournament Mason commented, “I’m really buzzing. You couldn’t relax and play you’re normal game. It was tough but the course was in mint condition. It was a struggle to control my emotion with the whole occasion but I got there!”

Last but not least was the Adventure Golf final, played over the Ryder Legends course. In his comments after taking the win over Mini Golf experts Richard Gottfried and Peter Jones, Simon Lee summed up American Golf’s reasoning behind the Adventure Golf Championship. “It’s a great way to get people who don’t play golf into the sport. They can come along and have a bit of fun. It was brilliant to see everyone come out today. If there was more stuff like this around I think you’d have more young kids getting into golf. That’s where the future talent comes from, starting off with things like this.” Playing partner Steve Gerrish followed up by saying, “American Golf have put on a great event. Everyone’s been involved, families, kids, it’s nice to see, it’s been brilliant.” 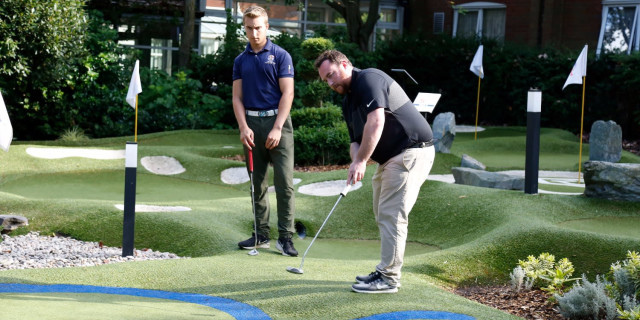 After watching all 8 The Championship Finals come to a conclusion, Daniel Gathercole, Director of Marketing and Communications at American Golf could barely hide his pride at the way the event had been received. “We’ve had so many complements from the competitors over the past three days I can only thank the whole team at American Golf for the hard work they’ve put in. I’m so proud of the free events we run, from the qualifiers through to the finals. We’ve had nearly 190 qualifiers playing across eight Championships here at the Belfry with each one showing a true love of the game, competitive spirit and fantastic sportsmanship. This weekend is what golf is all about and I’m delighted that American Golf is at the heart of it.”

All of the Championship finals will be shown on Sky Sports across October and November. The American Golf Events series is a vital part of American Golf’s drive to get more people out playing golf more often. In its fourth year, the Championships goes from strength to strength and with the quality of golf and personality on show through this year’s qualifiers and finals, golf with American Golf has a very bright future.