IT HAS been a strange 12 months for Tyrrell Hatton. The Englishman finally fulfilled his huge potential when he won the Alfred Dunhill Links Championship, a victory that was long overdue.

It was good enough to get him into the top 50 in the world rankings, and it also gave him a huge boost in confidence. He finished the season strongly and then enjoyed a superb run of form on the PGA Tour, climbing to 15th in the rankings. In a memorable spell of golf he finished fourth, 10th and fourth in successive weeks and it seemed that a victory on American soil was just around the corner. Inexplicably, Hatton then lost form and when he returned to Europe he continued to struggle with his game and his ranking began to slide.

But then came the British Masters, where he played some brilliant golf at Close House. And so he returns to St Andrews, Kingsbarns and Carnoustie to defend his title in this unique pro-am tournament. Hatton equalled the St Andrews course record during the third round last year and eventually finished four shots clear of Richard Sterne and Ross Fisher.

"It’s great to see my name up there in the rankings, but my goal is to keep playing the best I can, keep trying to win tournaments and the world rankings will look after themselves," the 25 year old said. “You want to be in the top 50 in the world and play in the biggest tournaments. For me the next step is to try to win more tournaments.


"To equal the course record at St Andrews is pretty cool. I was very surprised when I got into the scorers’ hut and they told me. I’d never shot 10-under-par in any round before. And getting the first win is always really important. It proves that when you play to your best you can win. It certainly added to the week to equal the course record at such an iconic venue for golf. And it was nice to carry that form into the Sunday with the added pressure of leading.

"It was the first time I had gone into a Sunday leading, so it was a whole new experience for me. I only had one hiccup when I hit a seven iron into the bunker on the Road Hole, up against the face. I had a five-shot lead at the time and I remember thinking I could be here until it gets dark, so I was very relieved to get it out first time, take my medicine and walk off with a bogey and enjoy the walk up the last."

50 days until @dunhilllinks crowns the next Champion, who will it be? Watch this snapshot of some winners over the years pic.twitter.com/MwPOsp3Auq

He will be hoping to draw on those positive memories, and will be encouraged by the fact that he is at last showing signs of playing his best golf again. He is a playing who thrives on confidence and that is sky-high once more. Hatton succeeded Thorbjorn Olesen as champion. It was won in 2014 by Oliver Wilson, in 2013 by David Howell, in 2012 by Branden Grace, in 2011 by Michael Hoey and in 2010 by Martin Kaymer.

Looking at the list of recent winners, it is fair to say that this year's champion is most likely to be somebody that you would not expect to pick up the trophy. And one man who will be hoping that is not the case is Rory McIlroy, who will be playing his final event of 2017.

He has never won this tournament but he loves St Andrews and is desperate to finish a frustrating year in style - and he has a decent record in this event, having finished runner-up on three occasions.


"The Alfred Dunhill Links is a great, late season event and I really enjoy the format," said the 28 year old, who will be playing alongside his father, Gerry. “I can’t wait to come back aand play over those three world-class courses I really respect.” 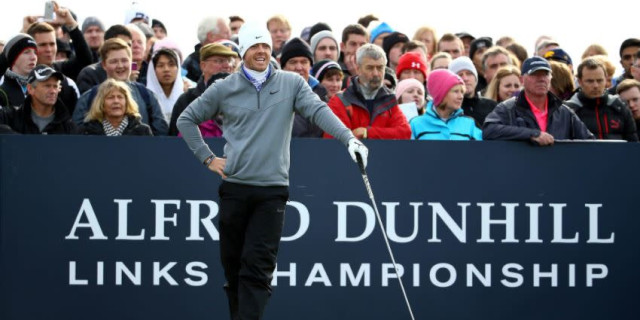 Surprisingly, McIlroy will be aiming to win in Scotland for the first time in his professional career and hopes the home crowd will spur him on. "The support I’ve had from the Scottish and visiting fans has always been fantastic and I have had some wonderful memories on these courses. I won my European Tour card after the 2007 Championship and I’ve played with my Dad a couple of times since. It's always a very special experience and I've had times I’ll never forget.”

Grace is a course specialist at St Andrews. He announced his arrival in 2012 and has not looked back since. Although he grew up and learnt his game in South Africa with the sun on his back, he loves links golf and enjoys the particular challenges thrown up by the Old Course, Carnoustie and the stunning Kingsbarns. Grace hasn't had the most memorable season of his career, and would be the first to admit that he has had more than his share of struggles on the greens, but he is a cussed character and a real competitor, and it would be a major surprise if he does not find himself in the mix again.

If you are looking for an outsider, then you might want to consider the Scottish pair, Richie Ramsay and Marc Warren. The season has been one long slog for Warren, but he found some form at the Portugal Masters, where he finished second. He is a player who feeds off confidence and is looking a big finish to his year. Warren tends to play with his heart on his sleeve, and you can be certain that the home crowds will inspire him, just as they will Ramsay.

Fisher continues to be one of the most consistent players on the European Tour, grinding out top 10 finishes for fun (six so far this season). He is another who relishes the challenges thrown up by links golf and will fancy his chances of yet another big week.

But the man you should be putting your money on is BMW PGA champion Alex Noren, who is ready for another big week. The Swede has turned himself into a world-class golfer. He does things very much his own way but his ball striking is hugely impressive and when he has his putting boots on he is as good as anybody.

To Win: Tyrrell Hatton. On a high once more

Each Way: Rory McIlroy. Looking for a bad finish to a miserable year

Branden Grace. Former champion who plays well in the wind

Alex Noren. Looking to bounce back from Close House disappointment

Lee Westwood. Just about back to his very best

Richie Ramsay. Will be lifted by local support

Alex Levy. A birdie machine on his day

Graeme McDowell. Showing some good form at the British Masters