McIlroy in Serious Danger of Missing the Party

RORY McIlroy turned professional in 2007 and won his first tournament, the Dubai Desert Classic, in 2009. His rise was and has continued to be meteoric...until 2017. Apart from 2013, he has won at least once every year since that maiden victory, including four majors

He is the defending FedEx Cup champion but he heads to the BMW Championship in 51st position in the standings, trailing Jordan Spieth by 4,190 points. He needs a big week at the BMW to have any chance of making it to the season-ending Tour Championship, when only the top 30 players in the standings will be allowed to compete.

Of more concern will be the fact that he has been unable to win this year. And, in truth, he has never really looked like doing so. He lost the South African Open to Graeme Storm in a playoff and we all thought that this was going to be a special year for the Northern Irishman, but he announced immediately after that tournament that he had to take time off because he had suffered a rib injury while trying out new equipment. McIlroy has never been one to do things by halves, so when he was looking for new clubs he hit thousands of shots and his body was unable to stand up to the strain.

He arrived at The Masters, where victory would have seen him complete the career Grand Slam, was hopelessly undercooked and was never in contention. despite finishing in a tie for seventh. He missed the cut at the US Open, where he became embroiled in an unfortunate Twitter spat with Steve Elkington, finished fourth at The Open and 22nd at the US PGA Championship. It is now three years since his last major victory. 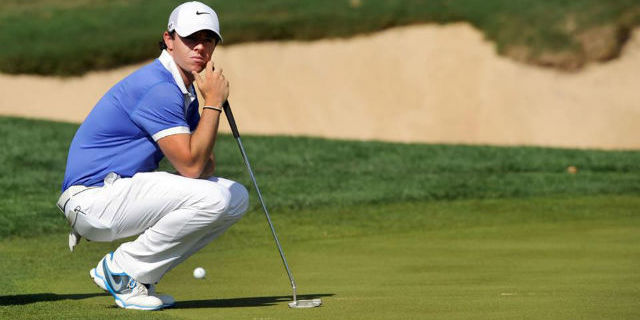 There have been times during 2017 when McIlroy has had the air of a man who would rather be anywhere else than on a golf course, and at times his putting woes have been painful to watch. Newly married, of course his priorities have changed, and we should not lose sight of the fact that he has always been a streaky player. At his very best, there is nobody in the world who comes close, but we haven't seen much of that this season. In saying that, he has played in 11 tournaments, missed just one cut and had six top-10 finishes. But McIlroy is interested only in winning, especially when he looks around and sees Justin Thomas, Dustin Johnson, Jordan Spieth and Hideki Matsuyama winning 15 times between them,

He announced a few weeks ago that after the FedEx Cup was over he would play in the Alfred Dunhill Championship at St Andrews and that would signal the end of his season, claiming that he wanted to take a couple of months off to finally give his rib injury a chance to clear up. When he made that announcement he would have expected to have been in the field at East Lake - that is now looking unlikely.

McIlroy may be the biggest name who is struggling to make the final act, but he is by no means alone. There are some surprising strugglers.

At the start of the year you would have bet your bottom dollar on Jason Day being in the top five in the standings at this point, but the Australian finds himself in 28th place, knowing that a poor week at the BMW could easily cost him his place at East Lake. Sergio Garcia won The Masters in April, but, in truth, has done little else in 2017 and finds himself in 34th place in the standings. He will probably need a top-10 finish at the BMW to make it to the Tour Championship. And Phil Mickelson, is 36th in the standings and in exactly the same boat as Day.

It is also a surprise to see Charl Schwartzel back in 43rd place. He has found a level of consistency this season and has one of the sweetest golf things you will ever see. Also in serious danger of missing out are 2015 Open champion Zach Johnson (54th) and Spain's Rafa Cabrera Bello (60th), who finally won again this season, but on the European Tour, and Ryan Moore (67th), who pushed McIlroy all the way at East Lake 12 months ago.

Many people will be rooting for Ian Poulter. The Englishman began the year outside the top 100 in the world rankings and retained his playing privileges by a whisker earlier in the year. He nearly won the Players Championship at Sawgrass and has gone from strength to strength ever since. You may be surprised to learn that Poulter has never made it to the Tour Championship. He starts the BMW Championship in 47th place, needing to climb 17 positions. He has already made it clear that he is desperate to climb into the top 30 - don't bet against him doing precisely that.

But a Tour Championship without McIlroy, without Garcia, without Mickelson and without Day? It is unthinkable, and it proves, without question, that the guard is changing.