American Golf enjoyed its inaugural Golf Awards held at the Belfry on Thursday evening, with the company marking the best British achievements in golf, as voted for by thousands of golfers throughout the UK. Tommy Fleetwood and Georgia Hall were declared the U.K. & Ireland players of the year, while PING was named brand of the year.

In the player categories there were two clear winners. The voting public reflected on some fantastic performances from Tommy Fleetwood that have seen him climb to the top of the Race to Dubai rankings off the back of two European Tour wins and 4th place in the U.S. Open. The Southport born world No.16 was a clear winner, taking the lion’s share of the vote ahead of fan favourite Andrew Johnston.

Upon learning of the award, Fleetwood said, “Getting the award for Player of the Year from American Golf is great and it means so much that it’s been voted for by the public. I’ve been able to get back to form this year with the support of my friends, family and the fantastic team around me, and to now have the public recognise all the hard work is really special.”

In the ladies category Georgia Hall was named as 2017 Player of the Year. 2017 has seen Georgia climb to No.3 on the Ladies European Tour order of merit, showing incredible consistency to record three top 5 finishes including 4th at the Ricoh Women’s British Open. Georgia went on to further cement her place in the hearts of U.K. golf fans by taking two points in the Solheim Cup, a feat which elevated her above Charley Hull who took second place in the American Golf public vote.

Hall was delighted with her award, especially the fact that it was voted for in Solheim Cup season, as she said, “I was up against many of my great friends and team mates at the recent Solheim Cup so I’m absolutely honoured to be able to win this award….. It means a lot to me and I appreciate it so much.” 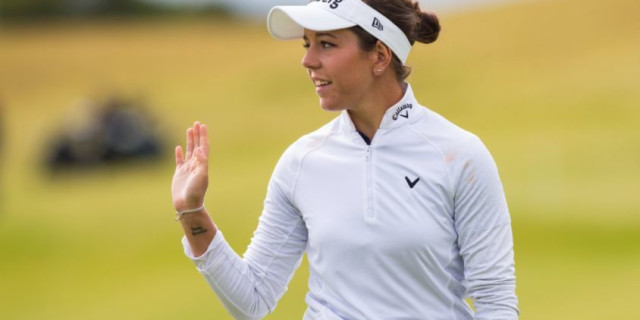 One of the best received awards of the night was the American Golf Game Changer Award. PGA Master Professional Alasdair Barr was recognised for his continuing dedication to the development of the game of golf worldwide along with his work with Services charity On Course Foundation. Barr has worked with the R&A and PGA, taking golf to some of the most disadvantaged communities in the world, giving insight to new golfers and passing on skills to coaches in their home countries. Barr also gives his time to On Course Foundation, developing and leading their programme of rehabilitation for wounded, injured and sick Service personnel, using golf.

Barr was quite taken aback by his award, with his recognition being kept a secret until the announcement was made, “I’ve been a PGA Professional for 50 years and coached a World No.1 in Luke Donald but the past 5 working with On Course Foundation has been the most satisfying,” he said. “Just yesterday I was working with a guy who had PTSD and hadn’t left the house for 15 months. By the end of the day he was laughing and having fun. I’ve had people tell me that golf is the only reason they get up in the morning and that On Course Foundation has made them feel that they’re not alone. This award is more about the members of On Course than me. Without them I wouldn’t have the chance to get such enjoyment out of passing on the game I love. The only downside is that people know I do this for free and it doesn’t do any good for my reputation as a Scotsman!” 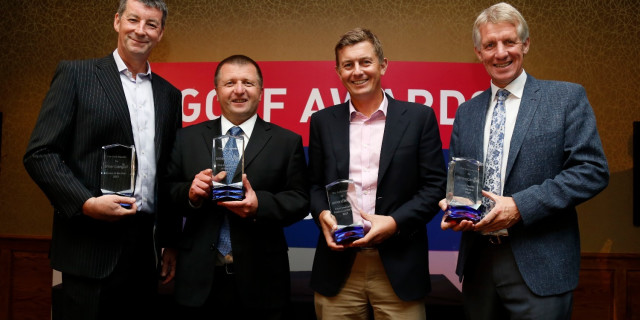 Another PGA member to gain recognition was Jon Earl who won PGA Professional of the Year for his work at Ified Golf Club. Having progressed through the junior ranks at Ifield, Jon took the role of Head Professional at the age of 25. Over 20 years later he is still there and was described by numerous members in their nominations as the heartbeat of the club. His work with Juniors, Ladies and the general development of the club was praised as above and beyond that which should be expected and his service to Ifield recognised by members as outstanding.

Away from the people honoured, PING was the big winner of the night with their award for Brand of the Year. The voting public recognised a year in which Ping have consistently delivered products that have helped the U.K. golfing public improve their game and get more enjoyment from their golf.

Another brand celebrating was Arccos for their Most Innovative Product of the Year – Arccos Caddie – with the virtual caddie being recognised above several strong contenders in a fantastic year for innovation.

Last but not least, Golf Facility of the year went to 3 Hammers Golf Complex in Wolverhampton. The pioneering venue, which combines state of the art practice facilities, 18 hole short course and nationally recognised golf academy programmes pipped Boomers & Swingers from Manchester to the honours in this inaugural year.

At the culmination of the awards, Daniel Gathercole, Director of Marketing and Communications commented on the success of the night, “It’s been a huge honour for us that so many members of the public wanted to be part of our drive to recognise the best in golf. People have voted in their thousands which has really made these awards a very special event. All of the recipients have had a fantastic year and in the case of Alasdair Barr, an incredible life in golf. I couldn’t be happier with the way that the awards have been received and look forward to seeing more people get recognised by the public in years to come.”