Armed with highly lofted woods, a relaxed mind, and recovered body, Michelle Wie produced a masterful display of low scoring on a receptive morning at Kingsbarns to lead the Ricoh Women's British Open after shooting an eight-under round of 64.

The East Neuk of Fife was uncharacteristically tranquil as the sun rose and with it the major championship debut of this modern classic designed by Kyle Phillips. It couldn’t have looked any better to those playing, with the striking layout appearing somewhat reminiscent of Hawaii. Apparently. Those aren’t the words of an admittedly biased Scottish golf writer, but the thoughts of the day one leader, a native of those Pacific islands.

“The views here are just spectacular,” she said. “Especially when the weather is good like this, it almost feels like playing back home in Hawaii. It was gorgeous out there. I had a lot of fun today.”

It always helps when you make nine birdies, and that’s exactly what the 27-year-old American did, reminding us of the once unlimited potential and talent that created an unprecedented phenomenon around Wie as a youngster more than a decade ago.

From teenage sensation to Stanford graduate, with several swing changes and a litany of putting styles thrown in for good measure, her career has become an unpredictable story, but it remains a highly compelling one, with the next chapter potentially being written just a handful of miles from the most historic of golf monuments, the Old Course at St. Andrews. 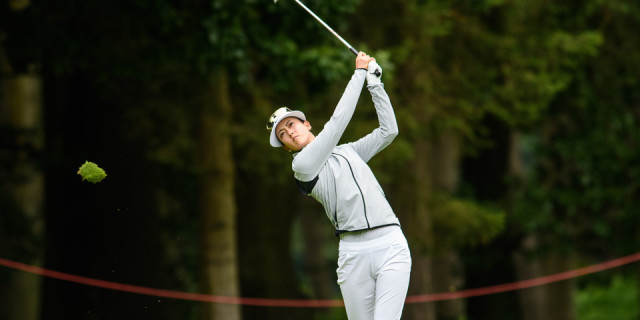 However, this blistering start didn’t seem likely early on. Dropping a shot on the par five second after a “skulled” wedge approach, Wie sat over par after three holes as the links was doused with the red of birdies. The former U.S. Women’s Open champion ultimately joined in with the fun on the fourth, before rounding off the front nine in a two-under 34.

Using two unusually lofted woods – a nine and 11 to great effect – the Hawaiian was simply imperious coming home, making six birdies (including three in succession to close) to reach the summit of the leaderboard. Recent winner on the LPGA Tour, In-Kyung Kim, sits one back in second, a shot ahead of former American Curtis Cup star Lindy Duncan.

For home fans, it was a memorable day for the English, with strong showings from Jodie Ewart Shadoff, Mel Reid, Charley Hull, Georgia Hall, and the legendary Dame Laura Davies, who rolled back the years brilliantly in her 37th appearance in this event. They will be hoping to end an eight-year drought for UK golfers, with Scotland’s Catriona Matthew being the last British winner in 2009.

But Wie still has a unique ability to make headlines. One of the few household names within the women’s game, people retain a marked interest in a player once unhelpfully touted as the female equivalent of Tiger Woods. She has enjoyed a fascinating journey and relationship with golf, and this round was unexpected coming just weeks after the world number 31 withdrew from the U.S. Women’s Open due to a neck injury, an example of the recurring problems that have prevented her from building on that first major triumph at Pinehurst three years ago.

For now, though, she feels healthy and ready to build an opportunity for herself over the coming days. “I hurt my neck the Sunday of KPMG (in June),” she explained. “I hit one shot and just started getting neck spasms and hurt my neck a little bit. Then I just didn't hit a single golf ball until the U.S. Open. I was doing everything I could, like three physio treatments a day, doing everything I could to get my neck back. But it just wasn't enough time. I think if I had two weeks or so, just unfortunately just these neck spasms were pretty bad. But thankfully I got to see my doctors in New York City after that, got a couple injections, and I feel pretty good.” 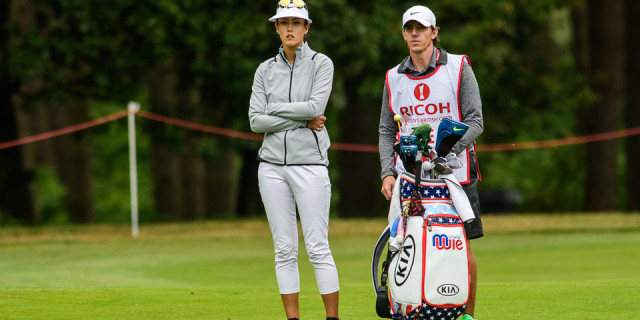 There has been frustration since picking up her first major. Wie’s subsequent results in the biggest events have been disappointing, with only a top ten at April’s ANA Inspiration to add any brightness to a series of missed cuts and withdrawals. Hampered with physical issues, there had been an additional phycological element to that, but Wie has come to Scotland with a positive mindset during the past fortnight – finishing in a tie for 19th at Dundonald – and is looking to relish her surrounds this week and embrace the challenge of contending on this stage again.

“I struggled with a lot of injuries in 2015, 2016, and I started to take things a little bit too seriously. You start to play in pain, you start to grind through things, and you sort of lose sight of it, lose sight that golf is a game,” she added. “I think sometimes you lose perspective when you are struggling. I just kind of had to take a step back and realise how lucky I am to be able to play a sport that I love for a living and get to travel to places like Kingsbarns and all this stuff. I live a pretty lucky life, and sometimes I think just having a different perspective on it and just thinking less about the results and thinking more about the process and just having fun out there because it doesn't matter what the results are. If you're enjoying what you're doing, then that's really all that matters.”

There’s no questioning that a 64 on a sunny day at the majestic Kingsbarns is one secret to enjoying yourself.