Book review: You! A Golf Guru

Recently I was contacted by Phil Rennett (@YouAGolfGuru) on Twitter. I had never heard of Phil before, he probably hadn’t heard of me either. So when he asked me if I would like a copy of his book ‘You! A Golf Guru’ to read and do a review for Golfshake I found myself in a bit of a situation for 2 reasons.

Firstly, I had never done a book review before. I always found that this is something book critics would do and post them up on The Sunday Times forums or in Peoples Friend magazine (I may be way off the mark there!?).

The second reason was because it meant that I had to find the time to sit and read the book itself. The last time I ‘attempted’ to read a book was the autobiography of Mr Poulter, which I started to enjoy but slowly fizzled out of it and to this day, have never actually finished……… 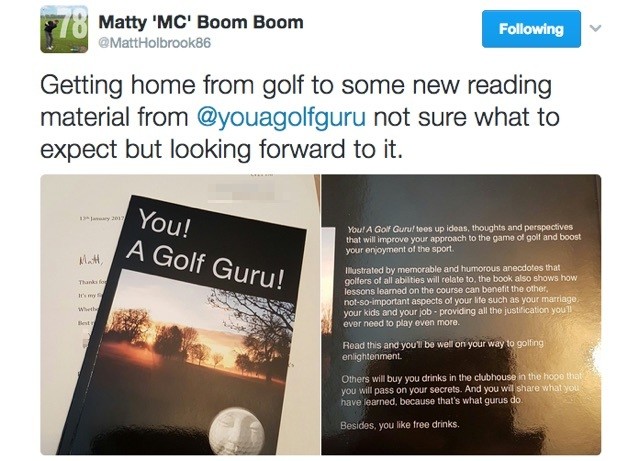 The book arrived on the Saturday – whilst I was out playing – my routine is to get home from golf, clean my clubs if needed, upload my GameGolf then input my score, including advanced stats, into Golfshake.

Once all that was out the way I picked the book up and began to give it a read thinking maybe 1 or 2 chapters to get the feel of it.  8 Chapters later I realised that I was really, REALLY enjoying it.

The first part of the book looks at some of the shots we face in golf and has, quite frankly, Phil (clearly a well-travelled golfer) sharing some of his funny stories/anecdotes that he has experienced during his golfing life. The types of shots/stories that everyone has heard/faced before, or even been the person involved in. But here is the smart part.

What Phil does is take those stories and experiences and try to take something from them in order to help his golf.

I recall one story around a playing partner who was sitting in a buggy eating a sandwich when it was his turn to tee off on a hole with a rather large carry. Instead of pegging his ball and trying to make the carry he just continued to eat his home made treat and claimed ‘I’m better off eating this sandwich than hitting the shot’. You may have to read it fully to find it funny. However as Phil recalls the story the guy clearly has a point. He knows his limits and he won’t try do anything that is out of them. It does get you thinking of all the times you have tried to push too far on a golf course, a tough pin, and a large carry etc. What really is the best option?

With each story, funny anecdote or experience shared Phil does his very best to dig the positive out of it and I found it very interesting to be able to relate to those stories and agree with pretty much everything he claims.

The second part of the book takes a look at how golfing experiences may have helped him off the course, as well as on it.

I don’t want to quote lines and lines from the book, it gives too much away, but look out for the ‘Tigger Tom’ part too………..you all know a Tigger Tom!

At 109 pages the book itself won’t take an age to get through, far from it, which going back to the start was a positive for me. Mix this with the fact I really enjoyed reading it and I actually got through it in 2 sittings, which I certainly didn’t expect!

The thing that I found a bit crazy about all of this was when I went onto Amazon to find that this little book of golfing delight is at a mere £5.49 – absolute snip!

Go and treat yourself. You won’t regret it.