What Can Golf Learn From Darts?

ON THE face of it, darts and golf may not appear to have much in common. Spectators at golf tournaments are expected to be silent when the players are hitting shots, while darts crowds are, to put it mildly, rather enthusiastic. Golf fans are also expected to remain sober - well, putting the stadium course in Phoenix, Arizona, to one side, that is. Darts followers enjoy several sherbets while watching their heroes.

And then there are the exponents. In the main, golfers are fit and have not an ounce of spare flesh on their bodies. Darts players, erm, are not. People who go to watch darts are expected to wear fancy dress and brandish silly signs - on second thoughts, maybe the sports do have something in common.

But seriously, can golf learn anything from darts. Well yes, actually. I think that it can.

I have just spent some time at the BDO World Darts Championships at the Lakeside in Frimley Green. You may dismiss darts as a pub game but they know how to put on a show.

For a start, before play begins the players all come on to the stage to be introduced to the crowd. Music blares out as they walk out, touching hands with spectators as they do so. The music is loud - really loud - and it is always upbeat. It makes you feel good. What's more, the players look like they want to be on stage and happily inter-act with both the spectators and the MC. Then it's the turn of the referees to do the walk - and why not? These are the men who belt out "ONE HUNDRED AND EIGHTY" or whisper "26" and are integral to the atmosphere that makes darts so special.

The MC is the man who makes these nights the great experiences that they are. Richard Ashdown may be only 5ft 3in but he is a terrifically engaging character with a huge personality. "Some people say there is no atmosphere at the Lakeside. What do you think about that?" The crowd roar, expressing their disapproval at such a slight. Men dressed as nuns, men and women dressed as traffic cones, elderly women in mini skirts and their hair in pigtails are indignant at the very thought. Dozens of people in orange cheer at anything and everything - they are Dutch and boy, do they know how to have a good time. 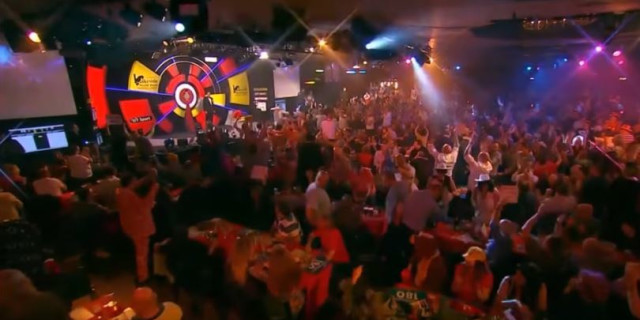 Between games, singalong music is played - Daydream Believer by The Monkees has everybody on their feet and joining in. Some people are drunk - very drunk! But there is not the slightest hint of trouble. They are all there to have a good time.

And as you look around the arena, there are the players, mingling with the crowds, signing autographs, posing for selfies and sitting down and chatting with the people who have paid their money to watch the action. The fans are beside themselves at the reality of this, that they can get so close to the men and women they have come to watch.

Oh yes, I nearly forgot. The men's and women's championships are played alongside one another, meaning that the women can judge themselves against the better-paid men at close quarters. Trust me when I tell you that some of these women really can play.

So how does any of this relate to golf? Well how about a tournament of champions featuring men and women playing alongside one another, on the same course, with a member of each sex emerging triumphant at the end of four days? The fans would eat it up. I am talking about everybody playing from the same tees, so exactly the same course. Throw in a long-drive hole  and a couple of nearest-the-pin prizes too.

There is a feeling that top tournament professionals are aloof and removed from reality, and that's because they are. They don't mix with fans. Sure, they sign autographs but with the exception of the likes of Phil Mickelson, there is a sense that they are going through the motions. Why not take a leaf out of darts' book and genuinely look forward to engaging with those fans? Golfers may just be surprised at the way spectators will take them to their hearts if they believe that those players want to play in front of them.

Some will dismiss this idea, but how good would it be if the best players in any tournament could be called to the first tee as a group and introduced to the galleries? Give Wayne Riley a microphone and 10 or 15 minutes to interview them, poke a bit of fun of them and maybe even take a few questions from the gallery.

And after Rory McIlroy has finished playing, what is to stop him heading into the beer tent and spending 20 minutes with the punters? I am not suggesting he starts knocking back pints of beer, simply that he and his like engage more with fans.

Golf can learn from darts, no question. Sport is meant to be entertainment and it is supposed to be fun - it is time that professional golf remembered that.