In a recent survey conducted by members and visitors to the Golfshake website, of over 4,000 core golfers, it highlighted the importance of golf course reviews online to both golfers and golf clubs.

The Golfshake website provides a valuable and informative service for both golfers and golf clubs through the Course Guide & Directory.  This section of the website is a tool for players to seek out potential new courses to visit, and a vehicle for clubs to reach those golfers.

With a monthly average of 150,000 online visitors to the Course Guide in 2015, which totalled at more than 900,000 for the year, it is a service that has continued to grow in popularity with many golfers using it for essential information looking through the reviews and potential courses to play.

This growth has resulted in the Course Guide now featuring more than 180,000 independent reviews, with 30,000 of them being submitted during 2015. The section also boasts 600 feature articles and a search engine consisting of more than 30,000 golf courses. 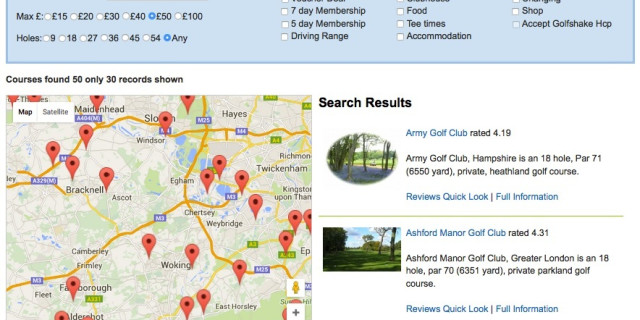 The survey discovered that 80% of golfers said that they would at times read reviews to help them find new courses to play, with 74% stating that those ratings had at times helped them to decide whether to play a new course or not.

Those findings are reflected elsewhere, with a recent survey from Invesp Marketing ** discovering that 90% of consumers read online reviews before visiting a business. The same is true for golf courses, who historically have relied on word-of-mouth to spread their qualities and strengths. The Golfshake Course Guide & Directory facilitates that same process, but via an online and mobile platform, which has the potential to reach thousands.

Overall, former Ryder Cup venue The Belfry is the most reviewed location, totalling more than 819 ratings at an impressive average of 4.77 out of 5. Last year, the most frequently rated courses in England were Pine Ridge (South East), Morley Hayes (East Midlands), Liverpool North (North) and Stableford Abbots (East). In the rest of Great Britain, Celtic Manor was the most reviewed venue in Wales, with St. Andrews (impressively rated 5 out of 5) being the most popular location in Scotland.

What is most noteworthy, however, is that 97% of reviewers left a positive rating with a recommendation or a suggestion that they would play that course again. This is an indication that golfers are more likely to submit a review if they found the experience worthwhile and rewarding,  which is especially positive for those courses and clubs that have significantly high average ratings.

These ratings may seem arbitrary, but they are important. Research by two economists from the University of California *** discovered that when a restaurant improved its customer rating by just half a star, it was significantly more likely to be full at peak times of the week. Such an incremental improvement may just play a role in a golfer selecting one course over another in a particular area.

This is vital for a small businesses – such as a golf club – that doesn’t have the name recognition or financial clout of a larger entity. NetShops, a niche online retailer in the United States, saw its sales increase by 26% after it began to implement customer reviews online.

Through the continued growth of the Golfshake Course Section & Directory, we are able to offer a facility for both golfers and clubs that makes it easier for players to discover new courses, and for those venues to connect with potential visitors.

For more information or data from the Golfshake ‘State of the Game Survey’ feel free to get in touch.