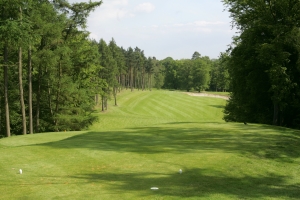 Donald Steel, the man behind some of the best courses in Britain was given the job of designing the Palmerston and sticking to his design philosophy he would use the land given and the golf course would just sit naturally within those surroundings.

One of Steel’s many traits is his ability to drastically change the way a golfer would normally play a hole by giving the player different ways to play it. On the Palmerston, there’re a few holes like this where risk will certainly be rewarded but get it wrong and the punishment can be severe.

His subtlety around the greens is also something to be admired; when you overcome the challenges facing you from the tee you are once again given options of how to attack the flag. Do you fly it all the way? Or go in low? Strategy is a key word I would use when going out to play the Palmerston, good course management around here will save you at least three or four shots from the out-set.

I’m lucky enough to have played a few of Steel’s designs and I have to say that I do love the way he sets up his courses and the Palmerston is no exception. A Par-73, standing at 7,080 from the Championship Blue tees down to 6.503 from the standard yellows you can pick how tough you want to make it but beware don’t be over confident as you will get bit as the course fight’s back.

You certainly get a mixed-bag of holes when starting out and by that I mean you’ll play a relatively easy hole followed by one that is much more difficult then back to an easier hole and so on until midway into the outward nine, so picking up shots on the right holes to start with is key on the Palmerston.

You get a kind start on the par-4 1st. If you get a good drive away onto the fairway which is some 30 yards wide you’ll be left with a mid to short iron approach in.

That will lead you onto the tough par-4 2nd and the first of what turns out to be many a narrow tree-lined drive. From the back-tees you struggle to pick your line as there’s not much to aim for. No fairway bunkers here but there’s no need, go off line and unless you’re very lucky you’ll have tree trouble. When in reach for the green, the trouble doesn’t end there. It’s quite narrow and very undulating. A par here is very good score.

The 3rd and 4th holes (below) are two of my favourites on the course. The 3rd is a short par-4 at 325 yards from the back and slightly uphill. But there’re two fairway bunkers brilliantly placed slap back in the middle of the fairway that come into play.

This is a prime example of playing a hole in a different way. You could take your ball to either side of the traps or if you’re long enough then go right over the top. If successful you’ll have a wedge into the green but the approach isn’t the easiest to judge as it’s up the hill and you can’t see the bottom of the flag. Although it’s short I can imagine some high scores have been racked up here.

Speaking of high scores the 4th could probably give you nightmares. Both me and my playing partner decided that it’s the best on the course to play rivalled by the 12th to look at.

A dog-leg left par-4 at 423 yards you must hit a draw of the tee or if you’re brave enough take it right over the corner with the driver. You can hit a fairway wood for position and to stay in play though. If taking it over or drawing round your ball will gather into the deep hollow leaving you again with a slightly uphill approach. Two bunkers to the right of the green, one slightly short and one directly next to it will punish anything, so if you’re going to bail out take the left side and use the natural contours to try and help you.

After the par-3 5th you get the first of five par-5’s. The 6th a dog-leg left again where as usual accuracy is needed of the tee.

The approach shot to the 7th and tee shot on the 8th will give you a breather from the tree-lined view and gives you a change to take in the scenery that surrounds the Brocket estate. The 7th plays all downhill and a sharp dog-leg right before playing the uphill par-3 8th.

The 9th and 10th are back-to-back par 5’s and good chances to pick up shots. If you hit the 9th fairway don’t be fooled by thinking the green is in easy reach. Look at your yardage and play the shot to the fullest. The two bunkers beside the green make it seem like it plays a lot shorter than it actually is. You can bail out to the extended fairway to the left to leave 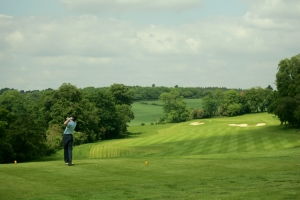 yourself a fairly easy pitch but onto a very tricky green.

The 10th (right) is fairly open compared to the rest of the course. A forgiving drive and second shot will take you right into the corner of the estate. This I’d say is one of the easier holes on the course.

The 11th is ranked officially as the hardest hole on the course but I’d only say it’s because of the tee shot which is very demanding and semi-blind. You must favour the left side or you’ll get caught up in the two cross bunkers that are blind from the tee. You are certainly rewarded by having a good tee shot though as the approach is open if not a little uphill.

The 12th (see picture at the top of the page) as previously mentioned is a marvel to look at both on the tee and for your approach. All you see from the tee is what only can be described as an old causeway or an old rock face that has been partially filled in. A fairway metal is all that’s required from the tee and will still leave you with a short approach over the hazard. Keep left as anything right will bounce off into trouble.

You’ll want to get through the 13th as quick as possible. The 606 yard par-5 is very narrow, very tree-lined and I speak from personal experience there and also very hard, again take it from me!

The long par-3 14th is one with a two-tiered green and after that you’re into the final stretch.

The 16th is a great par-4 and again visually difficult from the tee. By that I mean you’re faced with a number of obstacles 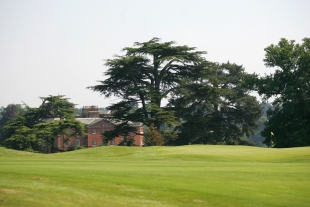 for which you must avoid and really commit to your tee shot. Over hanging trees and a fairway trap will gather anything offline.

The final flourish on this magnificent course are somewhat kind to you. A nice and gentle par-3 17th will take you onto the par-5 18th (right) which is pretty much all downhill and fires you back towards the new Palmerston lodge. Subtly placed bunkers around the large final green will be your last shot in but don’t be fooled by thinking that’s it as one of the most undulating greens waits. Just hope you can keep your nerve if a putt is riding on a win on this final hole.

Obviously everyone has their own opinion about golf courses and I for one am happy to sit and listen to all comers as long as they have a reason for it. To me there’s nothing worse than saying a course is bad because they had a bad round on it. For me the Palmerston is the better course at Brocket Hall and I’ll tell you why. EVERY hole is different. There’s not one tee box you stand on and think that it looks like another hole and for me that is one of the most difficult things to get right in course design. I’m not saying the Melbourne course is bad, in fact far from it. I just felt at the start of the back-nine a few holes just got quite repetitive and I like a course that will keep me on my toes. I go back to the start of this feature, tree-lined, challenging, pristine I could think of many more words to describe the Palmerston and what’s left for me to say is if you get the chance or want to get treated then this is the course for you.