When hearing and reading about the scandal, tragedy, romance and history of Brocket Hall it’s easy to understand why many people want to come and sample the delights that are hidden away in this Hertfordshire treasure.

When I say hidden away it’s hard to imagine what else is behind the gated entrance and inside its 543 acres of land.
Those lucky enough to find out are left in awe, in awe of the beauty of one of England’s finest stately homes and its intriguing history and exciting future.

Not only that, Brocket Hall is home to two outstanding golf courses of which are completely different to one and other, a Michelin starred restaurant situated next the River Lea of which views in the summer time whilst dining at the restaurant are something to behold and Melbourne Lodge, the estate’s hotel which was converted from the old stables into 16 rooms of elegance and charm.

Along with its rich history the estate has also added the new and improved Palmerston Golf Academy, with driving range and a second to none short game area with putting greens and bunker play which should leave you ready to go and battle one or both of the Palmerston or Melbourne courses.

Add all that to the very new Palmerston lodge which acts as a smaller pro-shop and club house to the Palmerston course. The new building can be found perfectly positioned between the 1st tee and 18th green.

The earliest evidence of residents living on the estate dates back to 1239 but it wasn’t until 1440 when Sir Thomas Brocket arrived from Yorkshire and made Hertfordshire his home and the house was rebuilt and renamed.

Kings, Queens, Presidents and Prime Ministers all feature in the history of the estate. Queen Elizabeth 1st was said to be sat reading under her favourite tree in the grounds when she was told that she was to become Queen.

Former Prime Ministers, William Lamb, Second Viscount Melbourne and Henry John Temple, Third Viscount Palmerston of whom the golf courses are named after both lived in the house and add their names to the intrigue and history of the magnificent estate. 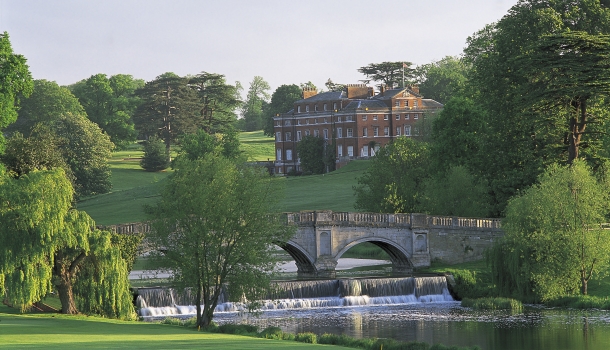 Moving on into more recent years the last Lord Brocket was arrested in 1996 for insurance fraud after allegedly trying to drown his Ferrari’s in Broadwater Lake and was imprisoned for 2 ½ years but since his release he has become an author and a reality TV star appearing in I’m a Celebrity....Get me out of here in the Australian Jungle.

It was the afore mentioned Lord Brocket who in 1992 built the estates first golf course and named it after Prime Minister Melbourne. BBC broadcaster and Ex-Ryder Cupper Peter Alliss and Clive Clark were handed the responsibility of designing the course which brings the River Lea into play on five holes including the famous 18th where a ferry is needed to cross the lake to get to the green.

When Lord Brocket found himself in his troubles he sold the lease to CCA International who have developed many exclusive golf resorts around the world and continue to do so with the addition Brocket Halls second course the Palmerston, named after the second Prime Minister. Acclaimed course designer Donald Steel who has Carnoustie and Turnberry on his design CV was handed the task of creating a course that winds its way through the estates woodland.

Part of CCA’s major improvement was to add the Auberge du Lac restaurant which is now famous in its own right. 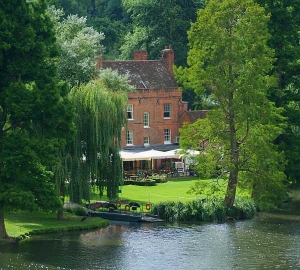 Hertfordshire’s only Michelin starred restaurant is overseen by Executive Chef Phil Thompson who has transformed the restaurant since taking over in 2005.

The picturesque setting along the river along with fine dining is the perfect way to end a day or weekend if you stay at Brocket Hall.

It’s the third year in-a-row that a Michelin star has been awarded as Thompson continues to shine with his fine cuisine.

You can find write-up’s of the restaurant in ‘The Good Food Guide’ in the last few years with descriptions as ‘something out of a fairy tale, drop-dead gorgeous, with food to match’.

I can only tell you so much; you MUST test Auberge du Lac out for yourself.

When you’re inside the estate it’s the most peaceful place you could ever imagine being. But you wouldn’t guess that you’re just 22 miles from central London and easily accessible from the A1 and M1.

Luton and London Stansted airports are as close as seven miles away in Luton’s case and transfers are available.

If escaping the hustle and bustle of the nation’s capital then a train from Kings Cross will get you to Welwyn Garden City in under half-an-hour. A taxi will get you to the gates within 20 minutes for you to enjoy your day or night.

I’ve been lucky enough to play on some great golf courses in England and indeed around the World but once you enter the gated driveway at Brocket you just get the feeling automatically that you’re going to have an experience to remember.

You can talk about the history and the elegance of the place and you’d never forget that but you certainly don’t feel like a visitor when you arrive as nothing is too much trouble for the staff involved with the golf or in the restaurants.

Brocket Hall pride themselves on being a private members club which is why they have had such an illustrious list of names from royalty to movie stars stay and use their facilities.

However with healthy competition around them and the golf industry the way that it is today Brocket have realised that they must open up more to the public and not just to the societies and charity days they hold regularly.

Those willing to pay the price of the green fees will no doubt get a return on what they have paid and more and I guarantee you won’t want the day to end.

There’re some good tee time offers available today and why not even got the whole way and enjoy a full stay at Brocket Hall?

For more information on the resort or estate visit www.brocket-hall.co.uk