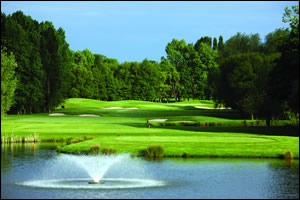 When you think of The Belfry you automatically think of the Ryder Cup.

The Brabazon course has staged more Ryder Cup matches than any other golfing venue. It's not surprising though. The four matches it has held have been some of the best in the cup's history.

The premier British golfing resort has three top quality golf courses and a hotel that can rival many in the business.

Set in 550 acres of English countryside, The Belfry hotel and resort is in the heart of the country yet only minutes away from major transport links.

The stunning setting in Sutton Coldfield is the perfect backdrop to an active break.

As well as 324 bedrooms, the hotel plays host to leisure and spa facilities, a selection of bars and restaurants, shops, an on-site nightclub and a choice of 22 function rooms.

The three golf course's all designed by Dave Thomas are all unique in their own way. The Brabazon, The PGA National and The Derby offer three challenges like nowhere else in the country.

The Brabazon course was opened in June 1977 with a challenge match involving Seve Ballesteros and Johnny Miller against Tony Jacklin and Brian Barnes. It held its first official tournament, the Hennessy Cup, in September 1978. Seven years later, The Belfry staged the first of its unprecedented four Ryder Cup Matches (1985, 1989, 1993 and 2002). The Benson and Hedges International Open was played on The Brabazon from 2000 to 2003 while The Quinn-sponsored British Masters successfully ran from 2006-2008.

The par 72 has a number of signature holes including the short par 10th which was first tamed by Seve during their love affair in that 1978 Hennessy Cup.

The 18th hole has been the site of many historic occasions, not to mention Sam Torrance and Paul McGinley holing out to win Ryder Cup's for Europe.

Read the Golfshake.com feature review of the Brabazon

The PGA National championship course, which opened in 1997, is one of only three PGA branded golf courses in Europe, alongside the PGA National Ireland at Palmerstown House and PGA Centenary at Gleneagles. The course has hosted several professional tournaments, including The Seniors European Open and The Belfry PGA Seniors Championship, and has an inland links-style feel, featuring large greens and plenty of strategically-placed bunkers with faces up to 15ft high. Measuring just 100 yards shorter than The Brabazon, and with par 3s stretching up to 224 yards, it is a challenging test for all standards of golfer.

The Derby course is ideal for golfers of all levels, this parkland course carries no handicap restrictions but is still kept in first-class condition. Although much shorter than the other two courses at The Belfry, with only one par 5, it features strategic bunkering, several water hazards and well-designed risk-and-reward holes.
Opened in 1977, the course has expansive views over Midlands’s countryside and is home to a wide range of tree species and wildlife.

The resort also plays host to the worlds only PGA branded National academy which was opened in 2003 by Sam Torrance a year after he led Europe to victory in the Ryder Cup. European Tour stars travel to the resort to use the
unrivalled choice of state-of-the art teaching facilities. It also provides lessons to over 200 club players every week, many of whom use the very same computerised teaching software to improve their games. The Belfry’s team of more than 20 PGA-qualified professionals can dissect every aspect of a golf stroke using the latest in swing analysis software, then diagnose any faults and reveal the best ways to fix them.

Over 6 million balls are hit each year in from the 34 teaching bays which are also home to the most comprehensive custom fit  equipment. Over 70 custom fits are undertaken each week in the National centre where over 12,000 different golf club combinations are available.

The resort knows it can't sit on it's history though and every day the course's are trying to improve. £3 million has been spent over the last three years striving to keep the high standards the resort has come to expect.

Book your stay or your round and follow in the footsteps of some of the greatest names in the game.

Branston Golf Club
Staffordshire from £9.00 Save 9%

Handsworth Golf Club
Staffordshire from £20.00 Save 20%