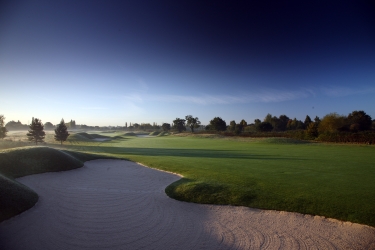 Standing in the shadow of its much famous neighbour, the PGA National shouldn’t be overwhelmed as it still has the quality needed to rival others around it.

Recognised by the PGA as a world-class tournament course, the European seniors and Europro tour have both held events on it.

Set in the wonderful and historic grounds of the Belfry, the course is one of three PGA branded courses in the British Isles, alongside PGA National Ireland at Palmerstown House and PGA Centenary at Gleneagles. This said the course is held in high prestige.

From the off-set it was designed as an inland links style course. Open fairways, large greens and deep bunkers.

Designer David Thomas wanted every hole to be a challenge. Standing only 100 yards shorter than the resorts world-famous Brabazon course, the PGA National will challenge a golfer’s accuracy, distance and control.

With over 70 bunkers strategically placed around the course some with faces over 15 feet high and water hazards waiting for your ball, the course will really test your ability to keep the ball in play.

You get a relatively kind start down the first hole. You just have to make sure you miss the huge bunker down the left the measures some 80 yards in length.

You will notice that every green has a bunker lying in wait for your ball. When I said earlier about how strategically placed they are you will realise how much they come into play when you’re faced with your approach.

The next few holes are where you really need to score well going into the middle of your round.

Water covers the next three holes starting with the par-5 2nd. If you’re long off the tee then beware of the stream that runs across the fairway. If you’re inaccurate then the huge lake down the right-hand side will be waiting for your ball.

The 3rd is a lovely looking par-3 over a lake to a tricky green. Club selection is vital here as three putting on this green is not un-common.

The 4th for me is the real stand out hole. A demanding carry of over 220 yards is required over a large lake to a narrow fairway, which is guarded by bunkers on both sides before falling away to a second lake. Accuracy is key here as a you’re approach shot is into a sloping green guarded by four bunkers that can’t be seen from the fairway.

After the 5th hole, another demanding long par-4 you cross the road to see out the front-nine and start the back.
You will notice that the condition of the course is the same as if you’re playing the Brabazon. Carpet like fairways and manicured greens will leave you wanted nothing more.

The 10th is a great par-5 from the championship tees with a split fairway some 130 yards from the green. If you’re playing from the white’s then this is reachable in two and a good scoring hole to start you off coming home.

After the 13th, which is a downhill hill, undulating par-4 you cross the road again to start your inward stretch.

The 14th is a risk and reward hole. The big hitters can go right over the large bunker that sits on the right hand side of the fairway. Clear that and it’s only a wedge to the green. If you not then a drive aimed down the left with a touch of fade is perfect to leave a mid-iron to a green that sits on a nice plateau.

The 15th is a par-3 and really depends on what tee you’re playing from. A 30-yard difference certainly changes the view of the hole. Playing 130 yards from the yellows to a fairly large green that runs towards you is quite inviting. Playing 160 yards or more over a stream and a well placed bunker is much more intimidating than going in with nothing more than a wedge or slightly more.

The 16th and 17th holes are great short par-4’s leaving you just one hole to play. At 367 yards from the championship tees you would think it’s not the most demanding of finishing holes. However there is danger to be found. An average drive will take the ball to the thinnest part of the fairway. You must be on the left hand side otherwise the huge oak tree will have you punching the ball towards the clubhouse. The approach shot will try and gather towards the large bunker that starts some 50 yards away from the green and finishes on the back left of what is a narrow target. Get in-between that and another large oak tree to the right and you will be nearly done.

Sam’s bar awaits you with pictures that have gone down in history from victorious Ryder Cup’s to Seve driving the green.

The place itself is so special and the PGA National is certainly a big part of it. Don’t be put off with having to settle for second best. It certainly isn’t the case here. You’re still part of something special and when you’re out there, make sure you take it all in.

Branston Golf Club
Staffordshire from £9.00 Save 9%

Handsworth Golf Club
Staffordshire from £20.00 Save 20%