Donald Trump, the controversial 69-year-old buisnessman who is currently leading the Republican presidential race in the United States, has this week threatened to withdraw £700 million worth of investment from his two major golf courses in Scotland - Trump Turnberry and the Trump International in Aberdeenshire.

This all came about after a public petition - calling for the New Yorker to be banned from entering the UK after making a succession of offensive and hateful remarks - reached a total of more than 500,000 signatures and will be debated by MPs in Parliament later this month. 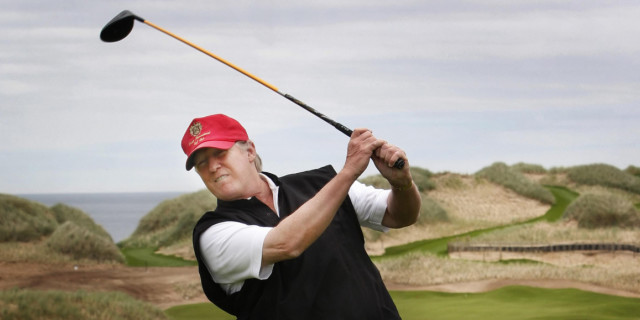 Trump has an extraordinary ablity to find himself in the headlines and push the right buttons, and such rhetoric will likely appeal to his political supporters, but what is the reality of the situation? In the face of a continuing legal battle with the Scottish Government over windfarms near his Menie estate, the promised investment has in reality not reached anywhere near the levels originally stated, with the infrastructure of the site falling way short of expectations.

The Trump Organsiation has now confirmed in a statement that any effort to restrict Mr Trump's movement would immediately see an end to all future investments in the UK. This would include plans to inject £200 million to develop the Ailsa Course at Turnberry, and £500 million that has been laid out for the spectacular Aberdeenshire links.

But is this all bluster, and yet another example of hyperbole and exaggeration from a man whose stated ambitions and wealth has usually been far exceeding the reality? That seems likely.

If #Trump is to withdraw £700m from Scotland he will have to INCREASE investment by x 10. Menie £25m; Turnberry under £52m. #fantasyTrump

Many in Scotland would welcome Trump's departure from the country of his mother's birth, but it remains to be seen just how this situation will develop in the coming weeks and months, but it seems clear that while the mogul remains in the presidential race, bridges are being burned at a startling rate.