IT IS a cliche, clearly, but for Colin Montgomerie it couldn't be more accurate - life really does begin at 50. And, to prove the point, he finished off the 2015 season by winning the MCB Tour Championship and, with it, the John Jacobs Trophy for topping the European Senior Tour Order of Merit for the second year in succession.

For the Scot there is a sense of deja vu. He won the order of merit on the European Tour a record eight times, including seven in a row - and has set his sights on repeating the feat with the over-50s. At 52 years of age, Montgomerie is arguably playing some of the best golf of his life. He still possesses the same languid golf swing that helped him achieve so much success on both sides of the Atlantic, as well as that incredible Ryder Cup record.

Montgomerie has enjoyed another great year of seniors golf 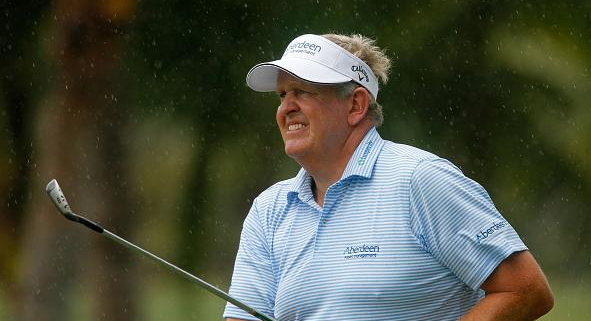 Monty finished the year as he began it, with another victory. He also added a third senior major, the US Senior PGA Championship. The big man led the order of merit from start to finish, eventually finishing the year with record prize money of  €679,147, an astonishing €456,805 ahead of second placed Barry Lane. He is the first man to retain the John Jacobs Trophy since Sam Torrance in 2006, and it would be a brave man who bets against him doing the same thing 12 months from now.

His victory in the MCB Tour Championship in Mauritius was his third of the season - he also won the Travis Perkins Masters for the third year on the trot. Incredibly, Montgomerie only played in five tournaments on the European Senior Tour, finishing in the top three every time he played.

It has been a great year, but it could have been a sensational one. He finished second at the US Senior Open and third at The Senior Open.

Nonetheless, Montgomerie was delighted. “It’s a great honour to keep the John Jacobs Trophy in my cabinet. Having won the Order of Merit on the main tour a few times in my career, it’s very nice to have continued that trend on the Senior Tour. They sit side by side very nicely. The standard of golf out here is improving year on year, so I’ve had to raise my own game to stay ahead of these guys.

“Defending my US Senior PGA title was obviously the highlight of my season, especially as it meant I finally got one over my old nemesis, Bernhard Langer. He never knows when he’s beaten and never gives you an inch, so to go head to head with him in the final round and come out on top was very pleasing.

“Then at Woburn, it was very special to win the Travis Perkins Masters for a third time and obviously to finish with another victory in Mauritius was the perfect end to the season. So when I look back on this year, those will be the standout memories for me.”

His victory at the Travis Perkins Masters meant that he became the first player to win the same tournament in three consecutive years on both the European Tour (the BMW PGA Championship from 1998-2000) and the Senior Tour.

After winning the MCB Tour Championship by three shots from David Frost, the 52-year-old immediately set his sights on achieving more success in 2016, particularly the Senior Open Championship, which remains the only senior major he has yet to win.

He said: "I guess the main focus would be to try to win more majors, and try to win the Order of Merit for a third season in a row. The Senior Open is on my radar, because it’s the only senior major missing from my collection and of course it’s being held in Scotland. But for now, I’m going to pack the clubs away, enjoy a month off and then get ready for the new season.”

Meanwhile, there was a morale-boosting victory for Jamie Donaldson in the Thailand Golf Championship. The 40-year-old Welshman hasn't had the best of seasons but he finished his year by shooting a seven-under-par final round of 65 to win the tournament by three shots from 23-year-old Frenchman Clement Sordet and veteran Englishman Lee Westwood.

Sordet led after 54 holes and should be proud of his final round of 70 in what was his first time in the final group at a major tournament. Westwood played superbly for a 67. And the good news for both Westwood and Donaldson is that their play in Thailand means they have returned to the world's top 50, qualifying for both The Open and The Masters next year.

For Sordet there was also the bonus of picking up one of the available qualification spots for The Open at Troon. Spain's Sergio Garcia shot a two-under 70 to finish fourth alongside South Korean An Byeong-hun.

And there was also an incredible performance by South Korea's Shanshan Feng, whose final round of 66 secured victory in the Dubai Ladies Masters by an astonishing margin of 12 strokes. It was her third victory in the event and meant that the 26-year-old finishes 2015 by winning the Ladies European Tour Order of Merit.

Feng, who is ranked sixth in the world, had rounds of 67, 67,67 and 66 for a 21-under-par total. Thailand's Thidapa Suwannapura finished second on nine under, with Melissa Reid, of England, a further shot adrift in third. Reid, 28, bogeyed the first hole, but after eight pars on the front nine she managed four birdies on the way home as she scored 69.

There was nothing that Reid or anybody else could do to reel in Feng. She started the day five ahead and promptly birdied three holes from the second. Further birdies came at the 12th and 13th before holing a three-foot putt on the 18th for yet another.