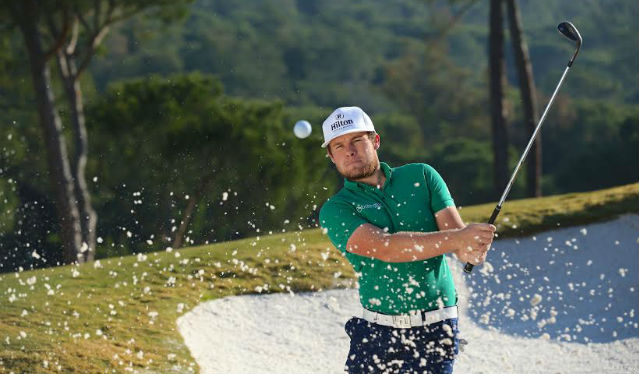 Tyrrell Hatton has made quite an impact on the European Tour since gaining his card in 2014 regularly appearing at the top of leader boards on the European Tour. He has already played in four Opens at the age of just 23 and will play the USPGA Championship this week following a fine run of form that has seen him enter the World's Top 100.

We recently sat down with Tyrrell at Bearwood Lakes GC to talk about life on tour and his plans for the future :

Well done on your 3rd place at The Omega Masters, obviously you are playing well at the moment?

Yes I have a good run recently, I played well in Germany until a bad final day. I also played well in France and the Scottish Open and had really great preparation going into The Open and just got a bit unlucky with the draw.

I knew I was playing well and had a good result at Crans Sur Sierre last year, so I was comfortable there and I really like the golf course. It was good to keep my form going into the week.

You were going well at St Andrews until the draw scuppered your chances a little?

Yes, I started off really well on Thursday and was -4 through 16 and 17 was playing really tough, three putted that and made double and that took the wind out of my sails. Following that it was always going to be difficult teeing off at 7.05 on Friday eve and only playing 1 and 1/2 holes Saturday morning and then having over a 10 hour delay before playing again.

Have you ever experienced a delay or round of golf like that?

No, that was quite difficult. I actually went home and had a sleep for several hours in the middle. It was long day.

That was you second Open at St Andrews at the age of 23. What was it like going back?

It was nice to be back, obviously I was hoping for a better week, I had a bad draw in 2010 as well, but it was great to go back and take it all in again.

You are 36th in the Race to Dubai and 102nd in the World, what are you goals for the rest of the season and going into 2016?

I would like to secure my place in the Race to Dubai final event, which I am close to doing and I would like my ranking inside the Top 100. I am hoping to achieve that and get into the final Major of the year - The USPGA. (Hatton has since achieved this goal and will tee it up at Whistling Straits). Moving forward my no.1 goal is getting that first win. Hopefully it is not too far away.

I wanted to learn a little about your sponsor, Hilton Hotels. Can you explain what they do for you and how they help you on tour?

It has been really great so far, they are now an Official Supplier of the European Tour and so they are usually the official hotel for the week, so I will stay in there and they look after me. I have been lucky to have a really good sponsor in only my second year.

I would imagine having the consistency of a great hotel each week helps with your preparation and throughout the week?

It always helps to be in a comfortable place and relaxed, because that is your downtime and you want to be as chilled out as possible. So, yes it is important.

You had a good amateur career before turning pro and in fact turned pro fairly young. You have made a great transition into pro golf. What did you do  that maybe some others didn't do that has made that transition possible?

Do you think the professionalism that now exists in amateur golf has contributed to that?

Yes, I think the standard of elite amateur golf is a lot closer (to the pro ranks) now days than even a lot of amateurs themselves realise. I think Walker Cup is not the be all or end all. You can turn pro early these days as long as you keep things consistent.

What would be your advice for a young player? Put everything place while playing as amateur and don't make any major changes if possible?

Yes definitely. I was quite disappointed when I missed the Walker Cup, but I moved on turned pro and just got on with it with what I had.

Lets talk a little bit about your life as pro. Clearly with the professionalism now in golf, you need to work at the fitness side of things?

Yes, you do, I tend to do a lot more in the off season. I go to the gym 4 times a week with a personal trainer. I find it a lot harder during tournaments, so don't do loads while I am playing. It is something that I plan to work hard on again in the off season.

So your not a gym rat?

I would like to be. You have to work so hard. Look at what Mcilroy has done. He has gone from a normal size to being ripped in just a few years.

Yes, I think for the likes of Woods & McIlroy it is a routine and they maybe do it to relax. How important is routine to you on tour?

Very important. For instance last week at Crans over 6 nights I had five Tuna and onion pizzas and one Fillet Steak. An athletes diet (giggles).

And technology, how do you use that?

Again in the off season and in between tournaments I will use a Flightsope. It is useful when the weather is not so great.

So you focus on the numbers from Flightscope?

No not really, it is just a case of getting the feedback to make sure I am swing well really. I am not technical at all. I just try and keep everything as simple as possible.