Golfing wonderkids - How do they compare?

Jordan Spieth has won two successive majors before turning 22 years of age. It is an astonishing achievement. But just how astonishing is it? And how good is he?

How does he compare with what Bobby Jones, Gene Sarazen, Jack Nicklaus, Tiger Woods and Rory McIlroy had managed by the same age? Here, we look at what they had all achieved before turning 22. Since Jones was an amateur, we are including the US Amateur and British Amateur Championships. You may be surprised by the results... 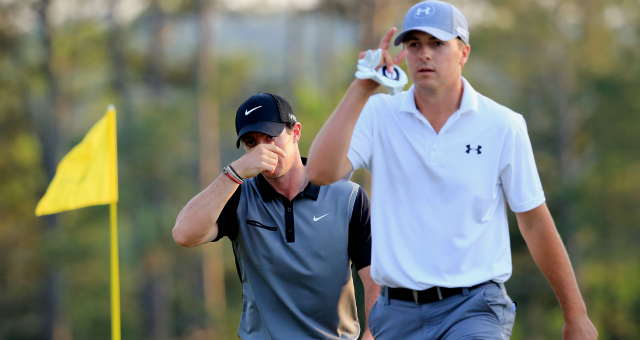 Majors won before age of 22 - US Open (1923), US Amateur (1924)
Total professional tournaments won by age of 22 - One
Strengths - Driving, short irons, putting,sense of fair play
Weaknesses - Could lose his cool when playing badly

Majors won before age of 22 - US Amateur (1994, 1995, 1996), The Masters (1997)
Total professional tournaments won by age of 22 - Three
Strengths - Long and short irons, putting stroke
Weaknesses - Wild from the tee, always has been. Never-ending search for perfection and need to tinker with a swing that won him 14 majors

Majors won before age of 22 - US Open (2011)
Total professional tournaments won by age of 22 - Three
Strengths - Brilliant driver of the ball, terrific with fairway woods and long irons, great temperament when playing well
Weaknesses - Streaky putter - when he is bad, he is awful. Lets shoulders drop when things are not going well

Total tournaments won by age of 22 - Six
Stengths - Brilliant putter
Weaknesses - Relatively short off the tee, with a tendency to hook the ball, lets his shoulders drop when playing poorly

So there you have it. Sarazen is the only one of this elite group to have won three majors by his 22nd birthday, BUT Spieth does not turn 22 until after The Open, and if he wins at St Andrews he will tie with Sarazen. And he already has more professional wins than any of the others. On top of that, he won the US Open while well short of his best form. It certainly provides food for thought - we might be watching the start of a stellar career.