Padraig triumphs in the tournament nobody wanted to win

THE 2015 Honda Classic will be remembered as the tournament that nobody wanted to win. History will tell us that Padraig Harrington put almost seven years of misery behind him (yes, really), but at least four men threw this tournament away.

The 44-year-old Irishman eventually beat 21-year-old Daniel Berger, the latest in a long line of brilliant young Americans, in a playoff after Berger found the water at the par-three 17th. Berger began the final round nine shots behind the leaders but reduced the fierce Palm Beach Gardens to 64 shots.

Quite understandably, an emotional Harrington was close to tears at the end of an extraordinary day, even by the standards of this amazing season. 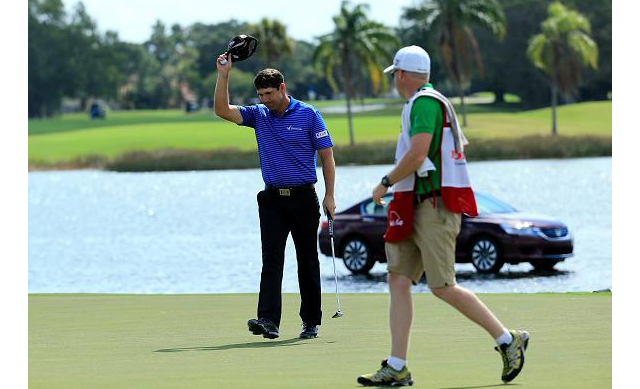 Ian Poulter has recently taken ownership of a very expensive new Ferrari - and he might have thought he was going to pay for it by winning. He might well have done, too, had he not put FIVE balls in the water in his final round.

Casey has achieved only a fraction of what he should have done in his career, given his undoubted talent. He lost in a playoff at the Northern Trust Open and continued that good play here before finally falling short.

How good it was to see Poulter and Casey battling it out at the top of the leaderboard in the rain-delayed final round. And they were not the only ones flying the flag for Europe as the field returned to Palm Beach Gardens to complete the final round. When darkness fell, Poulter and Casey were tied on seven under par, one ahead of Patrick Reed, with Berger, Jeff Overton, Phil Mickelson (yes, really), Brendan Steele and the admirable Scot, Russell Knox, two shots further adrift. One behind them was a group that included Harrington (yes, really).

Poulter was cruising along with a three-shot lead until he came to the par-three fifth, where he shanked his tee shot and walked off with a double bogey. Still shaken, he dropped another shot at the next, but showed tremendous grit when he struck a glorious iron shot to the seventh and picked up a birdie to go to seven under and tie with Casey.


Poulter resumed at the eighth and, after splitting the fairway, put his approach 20 feet from the hole and drained the putt to go back into the lead. Could he stay there? Instead it was Casey who faltered, falling two behind with a bogey at the 11th. When Poulter came to the same hole he dumped his approach in the lake from a perfect position in the middle of the fairway. Another double bogey meant he was back to six under, tied with Casey and Reed. Harrington, playing with Poulter and Reed, birdied the same hole and, at four under, was two behind, along with Berger and Knox.

Casey drove into the face of a bunker at the 14th, had to pitch out sideways and dropped back to five under and when Steele birdied the 13th it was beginning to get very tight at the top. Harrington rammed home another lengthy birdie putt at the 12th and suddenly he was just one behind (yes, really). Unbelievably, he also birdied the 13th and was tied for the lead (yes, really).

Berger, who began the final round nine behind, also moved to five under with a birdie at the treacherous par-three 17th, and had an eagle putt on the final green that slid agonisingly by. But the birdie gave him a 64 and a share of the lead. Meanwhile, Poulter's day went from bad to worse at the 14th. First he had to pick up under penalty, then his third shot hit a palm tree and landed in the water and his fifth plugged in a greenside bunker. Two shots later, his race was run.

Harrington and Reed both birdied the hole to go to seven under, but Reed handed the initiative straight back to the Irishman when he found the water at the 15th and further shots went at the 16th and 17th. With a one-shot lead, Harrington was next to find the wet stuff, this time at the 17th. A double-bogey meant he came to the last one behind Berger, long since finished and on the range hitting balls. Knox closed out with a 68, one behind Berger.

The putt that forced the playoff

The 18th is a par five. Harrington needed a birdie to force a playoff, an eagle to win, but drove into a fairway bunker. However, he managed a birdie after holing an 18-foot putt to set up a playoff (yes, really)! Incredibly, Poulter finished just one behind. And Jamie Donaldson was sixth on his own on four under, meaning that four of the top six places were occupied by Europeans.

Harrington and Berger returned to the 18th tee to begin the playoff. Both men made five, so it was off to the 17th. Harrington won when his young opponent put his shot in the water. Yes, really!