Bridgestone Golf has signed Stacy Lewis, the leading American golfer on the LPGA Tour in recent years and ranked No.3 in women’s golf, to play the brand’s increasingly popular Tour B330-RX ball this season. 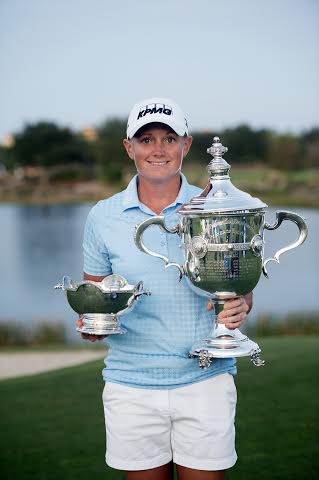 The 29-year-old from Ohio made history last year by becoming the first American player in 21 years to win the ‘triple crown’ – LPGA Player of the Year, winner of the Vare Trophy for the lowest scoring average and leader on the Tour money list, with more than $2.5m in prize money to her name.

“I couldn’t be more excited to become part of the Bridgestone Golf tour team,” said Stacy, who will play the ball worldwide beginning this week at the Coates Golf Championship. “Bridgestone has firmly established itself as one of the top golf equipment brands and after testing their B330-RX ball I knew that was the ball to help me take my game to the next level.”

Last month, Stacy was inducted into the WGCA Hall of Fame in Las Vegas and she joins Paula Creamer and Karrie Webb on the LPGA Tour playing the same Bridgestone Golf ball this season. Stacy won her second Major title at the British Open at St Andrews in 2013 and has 11 Tour wins to her credit since taking the LPGA Rookie of the Year accolade in 2009.

“Stacy is a great addition to the Bridgestone Golf Tour staff line up and a player at the top of her game,” said Steve Kettlewell, Managing Director of Bridgestone Golf UK. “Her endorsement of the Tour B330-RX ball can only help our sales to women golfers in the UK and Ireland in the coming months,” he added.

The Tour B330-RX is a 3-piece ball designed to offer accomplished players with a swing speed of less than 105 mph greater distance and tighter dispersion. It incorporates Bridgestone’s patented Hydro-Core and Dual Dimple technologies and has a RRP of £47.99 per dozen.

For further details about the B-Series and other Bridgestone Golf balls please visit www.bridgestonegolf.co.uk.