It looks like Darren Clarke is certain to be named as Europe's next Ryder Cup captain and that, in the opposite corner, will be the estimable Steve Stricker.

Let's start with Stricker. Now 47 years of age, he has cut back on his playing schedule but remains among the world's elite top 50. Respected and liked by his peers, Stricker may be just the man to turn around the fortunes of the US team.

He played under Paul Azinger in 2008 and bought into the captain's pod system, whereby Azingber split his team into three groups of four - from each group, he selected his fourball and foursomes teams. There was nothing random about this. Azinger did a lot of homework to ensure that the players in each pod got on.

Stricker has won 12 times on the PGA Tour, but he also endured a career-threatening slump and came close to walking away from golf. Through determination and sheer hard work, he battled back to such an extent that he was named comeback player of the year in successive seasons (2006 and 2007), a feat nobody else has ever achieved. He is also a winner of the Payne Stewart Award and the Byron Nelson Award.

He only played in 12 tournaments in 2014, but made the cut in all of them, enough to keep his ranking at 41. A good friend of Tiger Woods, he may also hold the key to getting the best out of the former world number one at the 2016 Ryder Cup. His appointment is a no-brainer and you can bet your last dollar on him getting the very best from his team.

And what of Clarke? It is true to say that almost everybody loves him and roots for him. He is a man's man, somebody who makes no secret of his enjoyment of a pint of Guinness.

In his prime, he was a regular tournament winner (14 times, to be precise) and when he played in the Ryder Cup at the K 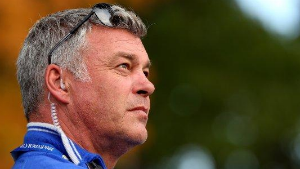 Club in 2006 just weeks after the death of his wife, Heather, there wasn't a golf fan in the world who wasn't rooting for him.
He is 46 years old and he stunned the world of golf when he won The Open in 2011. It was a timely victory because, at the time, Clarke was in financial trouble. Winning his first, and only, major, meant new contracts came pouring in and, for a while, he was seldom seen without a pint of the black stuff in his hands.

Now he is barely recognisable, having shed 56lb. Sadly for Clarke, his golf is barely recognisable either. John Daly once said that the worst thing he ever did was to have a gastric band fitted because he felt that losing weight left him feeling like he was only half the golfer he had been - in every sense. Strangely, Clarke has always struggled to produce his best form when he has been at his fittest. The problem is that he has reached an age where he little choice but to keep the weight off if he wants to reach a ripe old age.

Since winning The Open he hasn't managed a single top 10 finish on the European Tour, missing far too many cuts for a man of his ability. He decided to take up his exemption on the PGA Tour in 2014 and his form was, quite frankly, appalling.

Paul McGinley planned his captaincy meticulously. There will be questions over Clarke's ability to do the same. And his views on team bonding exercises are likely to differ hugely from McGinley's and may well involve copious amounts of alcohol! Joking aside, time will tell with the USA desperate for victory, it could be Strickers time on home soil.

What do you think of Clarke and Stricker as Captains? Would you pick them or someone different? We would love to hear your views. Feel free to coment below.