Another exciting chapter in the history of the prestigious La Manga Club resort in Spain has been marked by the opening of its new world-class golf tuition facility by renowned golf instructor David Leadbetter.

Leadbetter, who has previously coached a host of world number-one golfers, including Sir Nick Faldo and Ernie Els, was in Spain to cut the ribbon on what promises to be the finest golf tuition facility in Europe following a €1 million redevelopment of La Manga Club's already extensive teaching and practice centre. 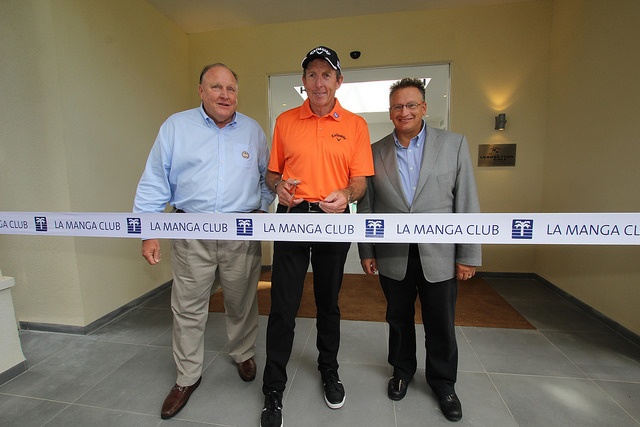 The centrepiece of the renovation is the creation of a bespoke Leadbetter Academy building - described by Leadbetter as "comparable with anything I have seen worldwide" - complete with two tuition studios, both equipped with the latest technology including Trackman, SAM PuttLab and K-VEST.

The Leadbetter Academy is directly adjacent to the remodelled range, and features two 36-metre Huxley grass tees, three extra mat teeing areas and a 150-metre wide, 35-metre deep grass tee area. The range itself has been extended to 300 metres with additional target greens, trees and bunkers added for increased definition.

"I have heard so many good things about La Manga Club for so long, that the opportunity to open a facility at the resort was one to jump at," enthused Leadbetter.

"La Manga Club has incredible facilities for golf, but also for tennis and other sports, and this new facility is right up there with anything I have seen in the world and enhances the resort's reputation as one of the best sports resorts in Europe."

After holding a special clinic with elite juniors from the Spanish Golf Federation, Leadbetter was joined for the inaugural drive-in by distinguished guests and members of the La Manga Club board, including former president of the PGA of America MG Orender and non-executive chairman PY Gerbeau.

Jose Asenjo, general manager at La Manga Club, said: "We are delighted that David could be with us to celebrate the opening of this incredible new facility, which we believe once again demonstrates La Manga Club's commitment to providing visitors with the finest environment and facilities for learning and enjoying sport - whether amateur or professional."

La Manga Club boasts unrivalled facilities as a sports and leisure destination and, as well as its golf courses and new academy, includes a 28-court tennis centre and a 2,000sqm spa and fitness centre. It also offers the choice of a five-star hotel, four-star serviced apartments and townhouses and more than 20 bars and restaurants.