Japan's wait for a new golfing hero ends at the Memorial

JAPAN has been waiting an awful long time for a golfer to finally make the breakthrough. You always sensed that when the right player came along, this sports-mad country would go golf crazy. For many years they pinned their hopes of 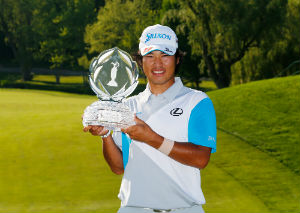 Jumbo Ozaki, but although he dominated the game in Asia, he never translated that form into victories on the world stage.

Many thought that Ryo Ishikawa was going to be the man. But Hideki Matsuyama has been quietly going about his business, racking up top 10 finishes and playing himself into contention. And on Sunday he arrived in the big time with a bang, winning the Memorial Tournament at Muirfield Village in the most unlikely of circumstances.

Just when it looked like he might miss out on his first career victory on the PGA TOUR, the 22-year-old birdied the 18th hole - and then he went out and beat Kevin Na on the first hole of sudden death. The victory means he has rocketed up the world rankings and stands 14th in the FedEx Cup standings - proof of his consistent play throughout the season.

Na, who finished off a 64 nearly two hours earlier, pulled his tee shot left on 18 in the playoff and watched it bounce into a creek.

Matsuyama had to go into the playoff without his driver - the head broke off when he slammed it into the ground following his tee shot in regular play. Using a three wood, he drove into a bunker and missed the green left. But he got up-and-down from the rough, flopping his third shot to 10 feet before sinking the par putt for the win.

Matsuyama became the first player to win the Memorial in his debut since the first year of the event in 1976. Though it was his first Memorial, it wasn't the first time the Japanese player had seen the host venue. Last year, Matsuyama teamed with Adam Scott there for the International Team at The Presidents Cup.

“It had a great effect on how I played this week,” Matsuyama said of the time he spent with Scott last fall. “I owe a lot to him.”

Scott helped him again yesterday, hitting his tee shot on the par-3 12th into the water and making double bogey to drop out of a share of the lead. The world No1 also bogeyed the 14th, 15th and 16th on his way to a 71 to tie for fourth.

Matsuyama could have replaced his driver but he didn't have a spare one with him. “I was really shocked, because I really didn't hit it that hard,” he said. “And I did okay with the 3-wood.”

There was some consolation for Na. His runner-up finish moved him high enough in the rankings to ensure he is now exempt for the US Open at Pinehurst and was able to give the 36-hole qualifier he had entered a miss.“That’s a big step, obviously,” he said. “I’m playing well, so obviously I'm having a good year. Hopefully I'll get a win soon.