RATHER like the fine rioja he relaxes with after coming off the course, Miguel Angel Jimenez continues to improve with age.

Already the oldest winner on the the European Tour, he became the first 50-year-old to claim a title when he won the Spanish Open in front of a patriotic home crowd at PGA Catalunya - and with it, he almost certainly booked his place in 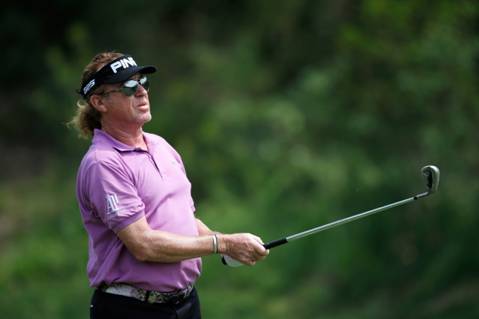 Europe's team to face the USA in the Ryder Cup at Gleneagles in September.

Jimenez let slip an early two shot lead before defeating Richard Green and Thomas Pieters on the first hole of a sudden-death play-off after the three players finished tied on four under par following a tough final round.

The players returned to the 18th for the play-off and all three failed to find the fairway or green in regulation, but Jiménez almost holed his chip from the back of the green for a birdie and a par proved good enough.

Green failed to get up and down from over the green and overnight leader Pieters, whose approach had come up short, saw his par putt catch the lip of the hole and stay out.

Jimenez has now won 21 European Tour titles, 14 of them coming since he turned 40, and Sunday's hard-fought victory continues a remarkable season.

The 50 year old was in contention to become the oldest Major Champion in history before finishing fourth in the Masters last month, and seven days later won on his Champions Tour debut. He has since got married, and now become the first player to win twice on The Race to Dubai in 2014.

"There's no words to describe what it means to me, you need to be into my skin but I'm not going to let you!" Jimenez said. "It's amazing. It's my 21st victory on The European Tour and 27 times I played the Spanish Open. I have been close a couple of times. Today it was very tough out there but I got it in the end.

"All the victories are special, all are unique, some of them give you more money, some less, but all of them are important. You play to win and when you make it you have to appreciate it.

"I don't know if I felt nerves, but you do feel tension, you feel the pressure. For instance on hole 17, when I saw the approach roll down the slope, those things cut my mind and take away the freedom from my hands. I don't know if that counts as nerves, but as tension, yes."

Asked the secret of his longevity, Jiménez added: "There is no secret. Good food, good wine, good cigars and some exercise!"

His win leaves him just outside the automatic Ryder Cup qualifying places, but European skipper Paul McGinley will surely make him one of his wild card picks if he doesn't make it by rights.

"I would love to make The Ryder Cup team, I would break all the records at 50," added Jimenez, whose last appearance was at The Celtic Manor Resort in 2010. "I hope I can make the team and defend the European colours in Scotland."
Pieters had held a two shot lead going into the final round but the 22 year old Belgian had a terrible start with three bogeys in succession from the second, allowing Jimenez to move two clear of the field with three birdies and one bogey in the first six holes.

Jimenez then dropped shots on the ninth and tenth and had to chip in on the 11th to avoid another. That left Green in the lead thanks to an outward nine of 34.

Green's chances looked to have disappeared when he ran up a triple-bogey seven on the 14th, hitting his second shot into the trees and after taking a penalty drop, compounding his error by three-putting from 30 feet.

However, the left-handed Australian repaired some of the damage with a birdie on the 15th and although Pieters made an eagle from four feet on the same hole, he and Jimenez both bogeyed the 17th to give Green another chance.

Green had won two of this three European Tour titles in playoffs, but now has ten second-place finishes to his name.

"I have to take a lot of positives out of it, it's the best I've played since the French Open last year," the 43 year old said. "I played well in the Australian Open over Christmas, just unfortunately struggling to get the job done.

"The 14th hole cost me big time and I played pretty solid from that point in and probably should have won the tournament by two shots if that had just been a par."

Pieters added: "I'm proud of the way I played this week, it was a tough week emotionally for my caddie with his best friend passing last week (Iain McGregor died during the Madeira Islands Open), so it was nice for both of us to get some more confidence going into some other tournaments."