WHEN he won the Amateur Championship at the age of 16 and then finished in a tie for 13th at The Open at Turnberry in 2009 it was obvious that Matteo Manassero was an extraordinary talent.

He turned professional after The Open and won his first tournament, the Castello Masters, in 2010. He was 17 years old and was the youngest winner in European Tour history, and would go on to be named Rookie of the Year. He won again in 2011 and collected his third title in 2012.

With each victory he climbed the world rankings, but his big breakthrough came at Wentworth last year when he beat 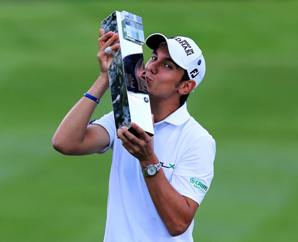 Simon Khan and Marc Warren to win the BMW PGA championship. Aged 20, he was the youngest winner of the tour's flagship event, and reached 25 in the world rankings.

Most people within the game expected that victory to be the catalyst for the Italian, now aged 21, to really kick on. It hasn't happened. In fact, his world ranking has slipped to 58.

Manassero will not be pushing the panic button though. In total, he has played 28 times on the PGA Tour since turning pro, and has just two top 10s to his name, and has missed eight cuts. In Europe, he has only twice broken 70 this season and has a best finish to date of tied 10th at the Volvo Golf Champions event.

It doesn't make for especially impressive reading, but it is so easy to forget how young Manassero still is. It should also be remembered that for all the fact that he won every year since turning pro, he is one of those golfers who struggles for consistency.

And that is something he has been working hard to put right. He has also started to find the distance from the tee that he lacked when he first joined the European Tour.

He has also changed his clubs, moving from Titleist to Callaway. And we all know the trials and tribulations that Rory McIlroy endured when he switched from Titleist to Nike. It may be seen as a gamble, but Manassero is convinced the switch will only do him good.

"After testing lots of different products, I am very happy to be joining Callaway and I am really excited to use their whole range of equipment," said Manassero. "I'm really impressed with everything so far and the Callaway Team has been fantastic."

The Italian joins FedEx Cup and Race To Dubai winner Henrik Stenson at Callaway, with the Swede signing up to the brand after using some of their equipment to such good effect last season. The manufacture has been making a big push recently, signing Harris English and Pat Perez.

Manassero will return to Wentworth with plenty of good memories. Don't be surprised to see him in contention again.