WHEN only four players break 70 in the first round of a major, and the best of those is a 68, you might well be forgiven for jumping to the conclusion that conditions have been brutal.

That is exactly what happened at Augusta as The Masters got under way, but there wasn't a cloud in the sky, hardly any 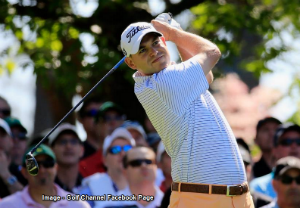 wind to speak of and temperatures in the high 70s - perfect, in other words. But when you throw the organising committee, the men in green jackets, into the mix at Augusta there is no such thing as a perfect day for scoring. You see, they don't like to see people shooting 63s, 64s and 65s hereabouts, and they can do something to make sure it doesn't happen - they can put flags in devilish positions, and then sit back and watch the fun.

The Masters got under way with Arnold Palmer, Gary Player and Jack Nicklaus hitting the ceremonial opening drives. Palmer is a frail octogenarian these days, but Nicklaus and Player still swing the club pretty well. And they weren't the only members of the old brigade who swung it well on opening day.

Fred Couples shot a 71 that could and should have been two shots better, Bernhard Langer, at the age of 56, crowned his 72 with a monstrous putt at the 18th and Miguel Angel Jimenez, already the oldest winner on the European Tour, proved he still has plenty of game at 50. His 70 included a double-bogey at the par-three 12th, when he dumped his tee shot into the water. It would surprise nobody to see the Spaniard in Paul McGinley's European Ryder Cup team later this year.

Mind you, he wasn't the only one to find the wet stuff. Ernie Els, Dustin Johnson, Adam Scott and Louis Oosthuizen did the same.

The less said about Johnson the better and for Els it was a struggle too. But Scott, the defending champion, birdied the first, sixth, eighth, 10th and 14th holes on his way to a 69. It was precisely the start he was looking for. Oosthuizen, who lost in a playoff to Bubba Watson two years ago, also battled back for a 69.

Afterwards, Oosthuizen said: "The greens were really, really quick out there, but I putted well. I will take a 69 every time around here."

And Watson himself, hitting the ball miles further than anybody else, was a late finisher with the third 69 of the day - when he was out there the greens were as fast and as hard as marble, making his score particularly notable. Watson loves it at Augusta and would be delighted to be shedding tears again on the 72nd hole come Sunday.

Leading the way with a 68 was Bill Haas, son of Jay, and a world-class golfer in his own right. Haas wins plenty of tournaments and is a former FedEx Cup playoff champion so he knows how to get the job done, but he does possess a suspect temperament and can blow a fuse when things go wrong - it is a certainty that in four rounds at Augusta plenty of things will go wrong, and how you handle that is key.

Craig Stadler, now 60 years old, shot a horrific 82 in what will be his his final Masters. His son Kevin was 12 shots better. Sweden's Jonas Blixt was another to shoot 70 - make no mistake, this guy can play.

Also on the same mark were Gary Woodland and Jimmy Walker, who was two over par after 14 holes and then found four birdies. Tournament favourite Rory McIlroy finished with a three-putt bogey on the 18th green but he was pleased with an opening round of 71, as was Matteo Manassero, the young Italian, and Jordan Spieth, the young American tyro about who much is expected. Scotland's Stephen Gallacher and Francesco Molinari also shot 71. You can't win a major on the first day but you can certainly play your way out of it, and all of these golfers will feel they are right in the mix.

Matt Fitzpatrick, the Sheffield-born US Amateur champion, played with Scott and had 76. "It was a fantastic experience to be out there with the defending champion, playing in front of so many people," he said. "I had the time of my life, and all I want to focus on now is making the cut."

Jason Day, one of the pre-tournament favourites, laboured to a 75, showing the ring rust that was inevitable after his injury lay-off, Phil Mickelson was a shot worse after carding two sevens, Justin Rosealso had a 76, Dustin Johnson a 77 and Luke Donald a dreadful 79. Jason Dufner had an 80 and bringing up the rear was South African Branden Grace with a scarcely believable 84.

So we are off and running and, in the main, most of the big guns are there or thereabouts. Keep an eye on Brandt Snedeker, one of the group on 70 - if he has rediscovered his puttng touch, as he seems to have done, he could well walk away with this thing.