Victor ready to take on Augusta

IN THE space of a few months, life has changed forever for Victor Dubuisson. We all knew that the Frenchman was a decent golfer but he has now proved that he is world class and deserves to be spoken about in the same breath as the likes of Rory McIlroy, Henrik Stenson and Luke Donald.

Dubuisson's transformation began at the Turkish Airlines Open in November when he beat a stellar cast that included Tiger Woods. Suddenly he found himself propelled into the world's top 50 and a host of doors began to open for him. The first was an invitation to The Masters, a tournament the 23-year-old had always dreamed of playing in.The week after winning in Turkey, Dubuisson found himself in contention at the Dubai World Championship. In the end, Stenson won the title, but the Frenchman was third, finishing ahead of the likes of Donald, McIlroy, Lee Westwood, Justin Rose and Graeme McDowell. 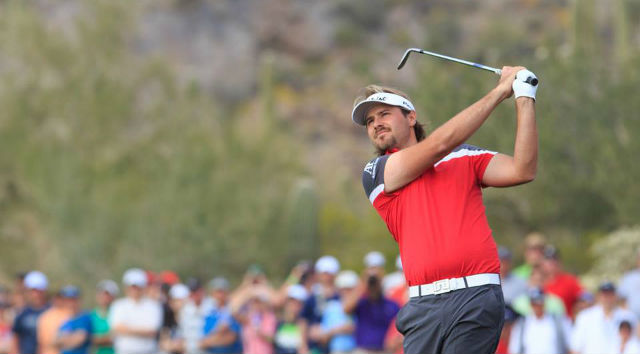 Then came an invite take part in the Farmers Insurance Open at Torrey Pines - his first PGA Tour event. "It's all been like a dream for me," he said.

And it is a dream from which Dubuisson shows no signs of waking up. He new status earned him a place in the 64-man starting line-up for the Accenture World Matchplay championship, during which he showed what an asset he will be for Europe's Ryder Cup team when they face the USA at Gleneagles later this year.

And it was Day who dominated the final, seemingly on his way to a comfortable victory until Dubuisson produced a fightback that Seve Ballesteros in his prime would have been proud of.

The Australian was in total control throughout the early stages of the match and was two up with two to play, before missing a 20-foot putt for the title on the 17th hole.

That gave Dubuisson the opportunity to take the match down the 18th and he did so with a superb birdie, before scrambling for a par on the last as Day left his attempt short having run a lengthy birdie putt some 10 feet past the cup.
The real drama began, however, on the first play-off hole. Dubuisson's approach flew long and into the desert, leaving what appeared an impossible chip shot. The Frenchman had other ideas, though, and managed a miraculous bump and run to five feet which was enough to secure a par to extend the match.

The players were then sent to the ninth, where again Dubuisson produced a poor approach shot and found desert. But yet again, despite his ball being hidden under a branch, he produced one of the most remarkable up-and-downs in the history of the tournament as a bemused Day looked on.

Neither player could manage a par on 10 with both missing mid-range putts, while Dubuisson missed a 25-foot putt for the title on the 14th, their 22nd. However, with light fading rapidly, Day managed to produce an excellent birdie on the short 15th and when Dubuisson's putt missed, the Australian was at last able to celebrate a first World Golf Championship title.

This was what Day had to say afterwards: "After the first of his chip shots from the desert he actually came up and apologised and I told him you don’t need to do that, we’re both trying to win. I didn’t know him at all but during that final he came across as one of the nicest guys you could wish to meet."

"What he did at the Accenture might have made Victor a superstar but I think he showed his true colours that week in Turkey," said Rose. "There was quite a buzz about him even before the tournament began. On the Sunday he got caught having had a big lead, but then pulled away again to win by two or three. So he showed a lot of us that he can really play hard and play well."

So just who is Victor Dubuisson? He fulfilled the potential he showed as an amateur by winning a European Tour card for 2011 via the 2010 Qualifying School Final Stage, a feat he described as a "dream come true", and he kept his card by finishing 106th in The Race to Dubai.

He improved on that by taking 52nd spot in 2012 thanks to fine performances in key events, including a superb spell in the Far East, where he was tied 11th in the Maybank Malaysian Open, tied fourth in the Volvo China Open and tied third in the Ballantine’s Championship.

He started playing golf when he was eight and by the age of 15 realised he could make a living from the sport. He won the European Individual Amateur Championship in 2009, the year he made it to number one in the World Amateur Rankings.

Dubuisson came 24th in his first tournament as a professional, the 2010 Nordea Scandinavian Masters, but says his prize money of €16,400 went towards paying the rent for his apartment in the expensive French town of Cannes. He also enjoys playing squash and tennis.

He refuses to talk about his family life but apparently left school at the age of 12 and had little to do with his parents thereafter.

Dubuisson lives in Honduras to escape France’s punitive tax system. The first thing he did after the Accenture was to change his phone number. "I haven’t had the chance to talk to Paul McGinley [Europe's Ryder Cup captain] but it’s probably because of that,’ he said. ‘He probably sent me a text or something but I didn’t receive it. But I hope to talk to him soon.’

It emerged later that McGinley did indeed try to contact him. And how entirely typical of Dubuisson that he never bothered to let anyone know his new mobile number.

Yet what a talent he is. Like everyone else, fellow FRench golfer Thomas Levet marvelled at Dubuisson’s short game prowess down the stretch at the Match Play, including those two unforgettable shots from the desert in the final.

"The higher the tension the better he plays," said Levet. "Yes, there was an element of luck about those shots. As Victor said, it was 50-50. But when you do it twice, is it really luck? Was it luck when Seve was playing those type of shots?"

He shouldn't have a prayer at Augusta, but something tells me that he just might surprise us all.