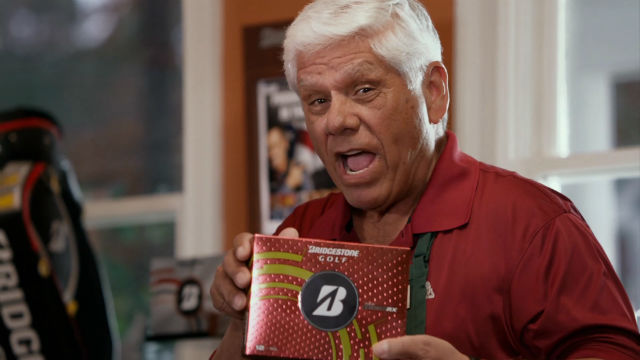 Bridgestone Golf,  begins its biggest ever UK advertising campaign this month with a TV burst around Sky Sports’ coverage of Brandt Snedeker’s defence of his AT&T title at Pebble Beach and Matt Kuchar defending his WGC Accenture Match Play Championship in Arizona.

The new campaign centres around popular golfing pundit David Feherty who enlists the help of star players like Fred Couples and Lee Trevino to find the right ball to match the swing speeds of customers visiting a Pro Shop. The TV commercial promotes the latest B-Series ball range with Hydro Core Technology.

In addition to exposure around Sky Sports’ coverage of leading PGA Tour events, other Bridgestone ads featuring Feherty and the new balls will be broadcast either side of talkSPORT radio news bulletins from The Masters in April and published extensively in golf magazines and online pages.

“Bridgestone’s biggest-ever ad campaign in the UK builds on healthy share growth in the golf ball market last year and is designed to help our retail stockists add more sales of both the new B-Series balls and the popular e-Series too,” said Steve Kettlewell, Managing Director of Bridgestone Golf UK.

Accomplished players with swing speeds of more than 105 mph can choose between the extra distance capabilities of the 4-piece TOUR B330 ball or the outstanding greenside spin of the TOUR 330-S model. The majority of golfers who swing the driver at less than 105 mph (77%) can gain significant distance off the tee with either the 3-piece B330-RX or B330-RXS balls.

For more on the new B-Series and other Bridgestone Golf balls, visit www.bridgestonegolf.com