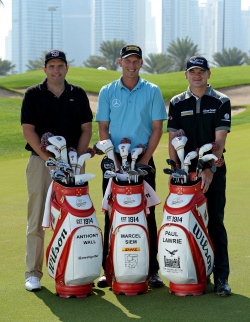 Tour stars including Padraig Harrington, Paul Lawrie, Marcel Siem and Kevin Streelman are set to unveil a new Wilson Staff Centennial Pro Tour bag to mark 100 years of outstanding Wilson Golf innovations – a period that has heralded an unrivalled number of Major victories with the company’s irons (61) and wedges (82).

The iconic red and white Tour bag – which features the vintage Wilson Staff shield and retro branding – will be put into play tomorrow (30 January) by brand ambassadors on both the PGA and European Tours for a limited period. Harrington, Streelman and Ricky Barnes will first showcase the special bag at the Phoenix Open, while Lawrie, Siem and Anthony Wall will do the same at the Dubai Desert Classic.

“It’s an honour for me to represent the iron brand with more Majors, but it’s also an inspiration for me to add to the total Major wins,” said Streelman, who last year used his Wilson Staff FG Tour V2 irons to win the Tampa Bay Championship and finish runner-up in the prestigious Players’ Championship.

Wilson Staff’s Tour stars will follow in the footsteps of Major-winning legends of the game like Gene Sarazen and Sam Snead who used variations of the famous red bag in the past.

“Wilson Golf has helped shape the game of golf with ground-breaking products endorsed by some of the sport’s greatest players,” said Tim Clarke, General Manager for Wilson Golf. “Our star players of 2014 are now looking forward to showing off the new Centennial bags on Tour and commemorating 100 years of heritage and innovation.”

The vintage logos and retro designs will also characterise several exciting Wilson Staff products available for golfers to buy from March. The Dx2 Soft – one of the UK’s fastest selling golf balls last year –will come in a special retro pack with six individually gold-foil wrapped balls inside, designed to resemble the classic style from the 1950s.

Also featuring the special centenary branding will be Wilson Staff’s neXus carry bag – which has proven extremely popular since its launch in October last year – as well as a range of headwear, headcovers, a towel and umbrella.

For more information on all Wilson Staff products, visit www.wilsonstaff.com