Marcel Siem, one of the most recognisable and exciting players in the game of golf, has teamed up with the iron brand 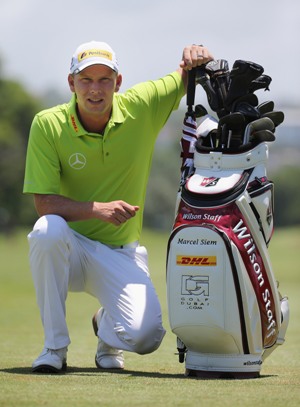 with more Major wins than any other by signing a multi-year contract to play Wilson Staff clubs in tournaments around the world.

The charismatic German, who won his third European Tour title last March, will be playing the latest Wilson Staff FG Tour M3 irons (4-PW) and FG Tour TC wedges, as well as carrying the Wilson Staff Pro Tour bag and featuring the brand on his cap. He’s set to debut with the new clubs in the Volvo Golf Champions event starting in South Africa this week.
Having spent much of the 2013 season in the United States on the PGA Tour, 33-year-old Siem is determined to build on his success at last year’s Hassan Trophy event in Morocco – where he led wire-to-wire for a three-shot victory – and sees his new Wilson Staff clubs playing a major role in the future.
“I’ve always admired the unrivalled success of the Wilson Staff brand in the Major championships and look forward to competing in more Majors with my new clubs in the future,” said Marcel, who won the World Cup for Germany in 2006 with two-time Masters champion Bernhard Langer. His biggest Tour win came at the French Open in 2012, when he closed with a final round 67 at Le Golf National in Paris.
“Marcel is a great addition to our Wilson Staff player line up during the Wilson brand centenary year,” said Doug Wright, Wilson Golf’s Commercial Director in Europe. “And it promises to be an exciting time for him playing alongside Major-winners Padraig Harrington and Paul Lawrie, plus PGA Tour stars Kevin Streelman and Ricky Barnes.”
The new Wilson Staff FG Tour M3 irons – forged from 8620 carbon steel with a matte black PVD finish – have been constructed with extensive input from Wilson Staff Tour professionals, while the award-winning FG Tour TC wedges incorporate a new groove crafted with laser-etched, micro-spin enhancers for increased spin and control