History of the Ryder Cup

This article was written by David Frederick, a golf enthusiast at Venatour, when he is not playing golf he enjoys sharing tips and articles with other golfers online.

With the 70th Ryder Cup fast approaching, I have decided to write an article on its historic background. This is quite possibly the most prestigious competition in golf if not sport yet so many people are unaware of its history. The Ryder Cup has played an integral role in the history of golf and the popularity of the competition continues to flourish year on year.

Every year thousands and thousands of golf fans flock to the Ryder Cup, which has been held by a number of countries, courses and weather conditions, and each year they are rewarded for their support with some of the most exciting matchups the game has to offer. What makes the Ryder Cup such a fantastic competition is its incredibly rich tradition that has been embraced over the years by some of the greatest European and American players the game has ever seen. 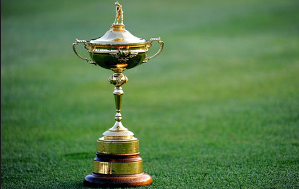 There is still a debate among golf enthusiasts about the origins of the competition. Many claim that the idea was thought of in 1920 and the first unofficial matches were played in 1921. A fact that can be confirmed though is the unofficial match played prior to the 1926 Open Championship. The Americans put together a team to face British professionals at Wentworth (Surrey, England).The British were victorious against the Americans, with Samuel Ryder, an influential English entrepreneur in attendance.

In 1906 Ryder was elected as the Mayor of St Albans, a role which caused his health to suffer from working too much. Fresh air and light exercise was the doctor’s recommendation to Ryder, which led to him taking up golf. After developing a fascination for golf, Ryder employed golfing great Abe Mitchell as his tutor. Ryder was present at an unofficial match in 1926 that saw Mitchell and the British team defeat the Americans.

When suggestions of an official match were made, Samuel Ryder kindly agreed to donate a solid gold trophy. Ryder was such an admirer of Abe Mitchell that he insisted the figure would resemble Mitchell.  The first official Ryder Cup was scheduled for June 3/4, 1927 at the Worcester Country Club. Sadly, Ryder only lived to see two Ryder Cup matches on British Soil and in 1936 he passed away.

The beginning of a special golf tradition

It was the Americans who won the first match of the prestigious Ryder Cup with a team that included golfing greats Walter Hagen, Johnny Golden, Johnny Farrell, Leo Diedgel, Joe Turnesa, Gene Sarazen, Al Watrous and Bill Mehlhorn. Americans dominated the Ryder Cup for 70 years apart from a few exceptions.  One of the most memorable matches was in 1969 at Royal Birkdale which resulted in a 16-16 tie.

In 1979 a colossal change occurred when the British team changed to a European team and had the opportunity to bring in new players, the change meant that the European team would become more competitive. Although the Americans won the Ryder Cup in 1979, 1981 and 1983, the European team closed the gap in playing standards quite considerably. In 1985 the European team continued to improve by winning at Belfry and then again at Muirfield Village. This was the first consecutive European win ever and the first European win on American turf.

This set the stage for some of the most exciting Ryder Cup competitions ever. In 1989 matches were televised back to the United States for the first time. After years of winning the Ryder Cup comfortably, American golf fans had suddenly started to take an interest in the competition. Since then the Americans have one the Ryder cup four times with the Europeans winning it several times. This year Gleneagles will host the masters in what promises to be another great competition.

This article was written by David Frederick, a golf enthusiast at Venatour, when he is not playing golf he enjoys sharing tips and articles with other golfers online.

Gleneagles and the Ryder Cup - A Timeline