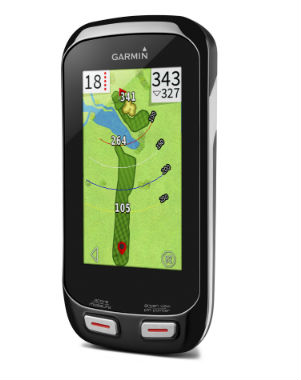 boast more than 30,000 preloaded international courses, a rechargeable battery capable of multiple rounds, and new measurement features such as PlaysLike Distance, which shows adjusted range for uphill and downhill shots. A major additional feature alows golfers who prefer to leave their smartphones in their bags. The new Approach handhelds offer Smart Notification technology, which lets the user receive emails, texts, and alerts right on their Approach.

The new PlaysLike Distance feature adjusts distances for uphill and downhill shots, so players get the most accurate yardage measurements. Additionally, both devices offer Club Advice, which remembers how far users hit each club and makes recommendations based on shot distances.  Another new feature in the G7 and G8 golf handhelds is the Big Numbers mode. This allows for easy viewing, so users can easily see the vital information they need without squinting or reading glasses. The Approach G7 and G8 also have the new Smart Notification functionality, so users can pair a compatible iPhone 4S or later and receive emails, texts and alerts right on the device. Android compatibility expected Q2 2014.

The Approach G7 and G8 handhelds come preloaded with more than 30,000 international courses, with no extra subscriptions or fees. Both devices give precise distance to the front, middle and back of the green, as well as layup and dogleg distances. They come with a rechargeable battery that plays an impressive 15 hours on a single charge.

With the vibrant screen, the G7 and G8 offer colourful layup arcs at 100, 150, 200 and even 250 yards, so users know exactly how far to hit when laying up. The Touch Targeting feature lets users touch any point on the display, and will give the precise distance to that exact spot, no matter if it is on the fairway, a hazard, a landing area, or even the front, middle or back of the green.  Like other Approach devices, the G7 and G8 have Green View. This allows users to zero in on a map of the green and manually position the pin in order to get the most accurate yardages. There is also an advanced Stat Tracking feature in the G7 and G8, which keeps track of fairways hit, greens in regulation and putts per round. These stats can be viewed during the round, or can be downloaded afterwards.

The wide screen premium Approach G8 boasts a, easy-to-read 3-inch multi-touch display and a sleek form factor. The G8 provides blind shot assistance with the new PinPointer feature. This unique feature shows the user exactly where the center of the green is, even if it’s not visible, and points them in the right direction for more accurate blind shots. Additionally, it adds WiFi, so the G8 will automatically update courses when connected to WiFi at no additional cost. This makes it easier than ever for users to update their devices. With these groundbreaking features, along with the slim design and vibrant screen, the G8 provides always the full picture of the game and rounds out the Approach family as the top-of-the-line golf handheld from Garmin.