Welcome to our weekly roundup of events on the world's major golf tours. Last week saw the European Tour head to Durban, South Africa for the Volvo Champions Tournament and the PGA Tour complete it's Hawaii swing with the Sony Open. 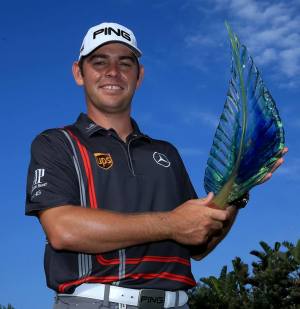 Wow, Louis Oosthuizen sure knows how to come out of the blocks fast!

Following his defence of the Volvo Champions tournament in Durban he has won his first event of the year in his last four consecutive seasons! Not too shabby by anyones standards.

Ousthuizen held off fellow South Afican Branden Grace to win by a shot. The win was completed in style with a birdie- birdie finish and marks Ousthuizen's 7th career victory on the European Tour. Oosthuizen also picked up 700'000 Euro winners cheque.

In wining the Volvo Champions Ousthuizen set some impressive records:

- Along with Charl Schwartzel he is only the second South African to defend 2 different European Tour events.

Oosthuizen was plagued by injury last year and while still not 100% fit, he is clearly on the mend and will be hoping this win will act as a springboard to challenge at the Masters where he lost in a playoff two years ago.

Next week the European Tour heads to Abu Dhabi for a star studded affair at the Abu Dhabi Championship.

Meanwhile on the PGA Tour at the Sony Open,Hawaii Jimmy Walker won his second event of the season following another great finish which saw him beat Chris Kirk into second and budding star Harris English into third.

It took Jimmy Walker 188 starts to win his first PGA Tour event, but appears that now he knows how, there will be no holding him back. Walker, who is a pupil of Butch Harmon birdied 4 of his last 6 holes to make a late Sunday charge to the title.

While the Waialae course is considered tough of the tee, it certainly yeilds some birdies with Walker becoming the sixth player in as many seasons to record a win with all rounds in the 60's

Next week the PGA Tour heads to La Quinta, California and the Humana Championship.