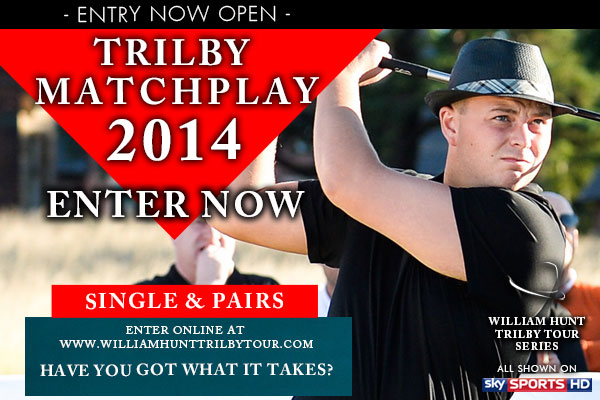 The search for the next Trilby Matchplay Champion is now on!
The Trilby Tour  are looking for the next Singles and Pairs Champions to win the title and broadcast it to the world on Sky Sports in a spectacular showdown - could it be you?
The team behind the Trilby Tour are keen to see if YOU have what it takes to lift the Trilby Matchplay Cup.
Entrants will be drawn across local rivals and the winner will go through to the next round.
It's Winner Stays On until the final 16 will be invited to a top venue to battle it out in front of the crowds and cameras.
The Matchplay Final will be filmed and broadcast on Sky Sports as part of the Trilby Tour television series.
It's a fierce and dramatic event - last year's Pairs Champions Andrew McCabe and Paul Wakely said "We felt what it must be like to be in contention in a major going down the last few holes!"
All finalists will receive a free William Hunt outfit, caddy outfit and golf bag to be worn during the televised final - altogether worth over £275!  (Finalists will be required to bring a caddy on the day)
Entrants are permitted to enter both categories.

£30 Matchplay Singles | £60 Matchplay Pairs
How to enter
Enter online at www.williamhunttrilbytour.com
Rules
Competitors may enter both categories.
Each player will be guaranteed at least 2 games with the first round being played over 2 legs – home and away. Aggregates scores over the 2 legs to count. Second round onwards to be played as 1 game - home or away.
Maximum handicap allowance of 28. Entrants are required to be the minimum age of 18 years on 1st May 2014.