Adams Golf have announced the signing of four-time major champion Ernie Els to a multi-year agreement where he will use a range of the company’s products and showcase the brand’s logo on his bag and headwear.

Owner of two U.S. Open and two Open Championship titles, Els was enshrined in the World Golf Hall of Fame in 2011. 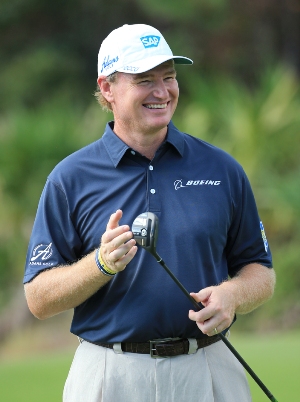 His 70 professional global victories include two World Golf Championships and a record seven World Match Play Championship crowns. The former world No.1 has triumphed in tournaments in South Africa, Europe, United States, Asia, Far East, Middle East and Australasia.
“As a player, there are many factors in something as fundamentally important as your equipment. Everything about Adams impresses me, starting with the enthusiasm and energy from company leadership and R&D, along with their strong products,” Els explained. “I’m partnered with a company where innovation is at the heart of everything they do, where they’re always looking to push the envelope and pursue new ideas that ultimately help players of all skill levels play better.”
Additional content, including videos and images, celebrating Els joining Adams may be found on the company’s social media channels @AdamsGolfEurope and https://www.facebook.com/adamsgolf. Follow the conversation at #ElsToAdams on Twitter.
“’The Big Easy’ is one of the most prolific winners of his generation and a natural match for Adams, with our philosophy of creating the easiest to hit golf equipment,” said John Ward, Adams Golf President. “Ernie’s worldwide appeal and iconic status fit our international business growth as we extend our stronghold in hybrids to other categories.”
Adams Golf have enjoyed huge success on the PGA Tour in recent seasons, the company increased its presence to 37 percent of all hybrids in play in 2013. This goes along with the company topping the Champions Tour count each of the last nine years and ranking as the most-played hybrids on the Web.com Tour since 2006. Adams also earned top billing on the European Tour for the first time and won the LPGA Tour season hybrid count.
Adams is hoping to emulate the success of it's hybrids with the re-introduction of the legendary Tight Lies fairway wood. Adams have re-invented  the classic revolutionary club design and combined with today’s technology, making it easy-to-hit from any lie. A tri-level sole design reduces the amount of turf interaction to create a larger impact area below the ball and promote crisper contact and more optimal launch.

Adams Hybrids new No.1 hybrid on the European Tour