Over 2,000 guests gathered at The Maxx Royal Belek Golf & Spa this evening (Wednesday) to celebrate the Maxx Royal’s 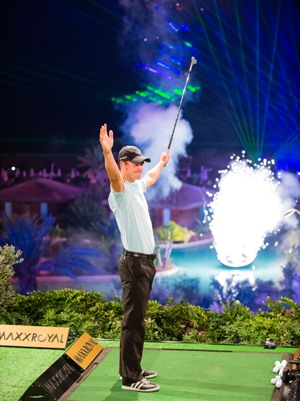 position as official hotel partner of The Turkish Airlines Open. The event pitted German Ryder Cup superstar, Martin Kaymer against Italian sensation, Matteo Manassero in a spectacular target challenge from the balcony of one of the world’s finest hotels.

Targets were placed in the expansive lagoon overlooking the breath-taking white sands of the Belek coastline with both competitors taking alternate shots in a match-play format until each of three specially designed floating targets between 50 – 90 yards had been hit.

Martin Kaymer started proceedings on the floodlit stage, and with a pitch which showed exactly why he has been to the summit of the Official World Golf Rankings and already won his first career Major, the German struck the first target with his very first shot! Taking aim at the smaller second target, which was two metres in diameter, both players came close but it was Martin who again set off a spectacular firework display when he struck the middle of the target. Manassero showcased his world-class ability, which has already led him to four wins on the European Tour, coming close to clinching the title on the ‘double points’ final target placed 85 yards from the stage. However, it was Kaymer who was confirmed ‘Maxx Royal Target Challenge Champion’, setting off a fireworks display, lighting up the night sky above the Maxx Royal Belek Golf & Spa and officially signifying the start of the week’s proceedings for the hotel.

“I can honestly say I have never hit a shot from a more luxurious setting,” commented Matteo. “I have been set some great challenges in the past, but this was one of the most spectacular.”

Kaymer’s accuracy was rewarded with a week’s stay at one of the on course luxury villas for next year’s event. Despite coming up short, Manassero was magnanimous in defeat, but equally rich in praise for the resort.

“I think everyone has been extremely impressed with the outstanding quality and service this week. The hotel is world class and I can certainly understand the appeal for golfers wanting to visit Turkey to play golf. A great venue for Turkey’s first edition of The Turkish Airlines Open,” commented Kaymer.

The Maxx Royal Belek Golf & Spa sits adjacent to the award winning Montgomerie Maxx Royal Golf Club, which will be putting this week’s competitors through their paces. One of Turkey and Europe’s most revered golf destinations has relished the opportunity to welcome both players and guests, looking to enjoy the event whilst rubbing shoulders with the stars of world golf and enjoying the world class facilities on offer.

“Tonight was a great opportunity to mark such a monumental occasion for Turkey and The Maxx Royal brand by creating ‘golf’s most luxurious’ shot, and kick off the week’s proceedings in true Maxx Royal style. We are honoured to have so many of the world’s best players here this week, and Martin and Matteo put on a great show for our guests. Both players were great sports in accepting our challenge and we wish them every success in the Turkish Airlines Open,” commented Mehmet Ersoy, CEO of the ETStur, Maxx Royal hotels and Voyage hotels.

Montgomerie General Manager Q&A ahead of the Turkish Airlines Open