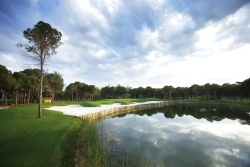 The Montgomerie Maxx Royal is situated on the breath-taking white sands of the Belek coastline in Antalya Turkey and The Maxx Royal Golf & Spa is gearing up to welcome 77 of the world’s best golfers for the inaugural Turkish Airlines Open from November 7th – 10th.

In less than a month’s time, the luxurious resort will be welcoming the likes of World #1, Tiger Woods; FedExCup winner, Henrik Stenson; U.S. Open Champion, Justin Rose; and Ryder Cup hero, Ian Poulter; all of whom have confirmed their attendance at the highly-anticipated event. This will provide the perfect opportunity to showcase the resort’s unrivalled offerings and hospitality on the world stage, and strengthen its position as Turkey’s leading holiday destination.

Designed by 2010 Ryder Cup Captain, Colin Montgomerie, the Montgomerie Maxx Royal championship course is in spectacular condition and ready to provide a suitable test for the penultimate event of the European Tour’s inaugural Final Series. The newly modernised clubhouse will also be revealed for the tournament, following an extensive €2 million investment, ready to welcome a wealth of players and spectators alike. Head Course Superintendent, Ben Lovett is excited about the prospect of welcoming the world’s best, “For me it is always exciting to host a tournament, but to be bestowed the honour of hosting the first ever European Tour event in Turkey is a real privilege. Due to the nature of the Final Series, the tournament is guaranteed to have one of the strongest fields on the European Tour this year. It is daunting to think so many great players are going to be competing on our golf course in such a high stakes golf tournament, but I am extremely confident our entire team will shine under the spotlight and deliver a course in pristine condition, showcasing the quality of golf on offer here in the Belek region.”

Lovett feels that the Montgomerie course will challenge the world’s leading players, “The course design is very much based on one of Monty’s favourite courses, Pine Valley. Players will have to strategically plot their way around, and we are aiming to get the expansive undulating green complexes playing hard and fast to test every aspect of the player’s game.”
Measuring at over 7,093 yards, the par-72 layout has undergone a number of changes to ensure that it is perfectly prepared to host the tournament. “Many of the key characteristics for tournament golf were already considered in the design process,” continued Lovett. “However, we have been working closely with the European Tour and the Tournament Director, Michael Viador to ensure that the course is in the best possible shape when the players arrive in November. We have narrowed several fairways and brought more hazards into play off the tee. The introduction of run-off areas around numerous greens is going to ensure accuracy is paramount. Colin Montgomerie has also been actively involved in the process and has given us vital feedback on the changes.”

The Turkish Airlines Open will provide a platform to showcase everything that the five-star plus Maxx Royal Golf & Spa resort has to offer; including luxurious accommodation and a plethora of dining and entertainment options. The tournament will further its reputation as Turkey’s most desired holiday destination.

How Much Do You Know About The PGA Championship