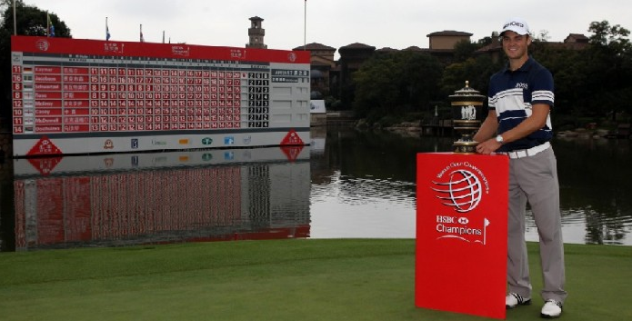 The golf ball, with its dimples, can in itself conjure up an image of the global spread of the game. Though, in the 14th Century, a lone dimple depicting Scotland would have been entirely enough, the sport today is played virtually everywhere, with China the centre of the golfing universe for the forthcoming WGC-HSBC Champions.

More than forty of the world’s top fifty players will be among those congregating at the Sheshan International Golf Club from 31 October to 3 November for what is the HSBC’s ninth championship in this burgeoning golfing land.
Jordan Spieth, Henrik Stenson, Rory McIlroy and the rest will teeing up for rather more than the £8.5 million purse; they know that anyone who wants to go down as a ‘world’ player must have a major Asian victory on his CV.  Phil Mickelson, of course, has won twice and is out for a hat-trick which will take some catching. “I sensed something special about the WGC-HSBC from the start,” said the reigning Open champion.
In keeping with its status, this year’s WGC-HSBC features not just in the Final Series on the PGA European Tour but on America’s FedEx Cup schedule.
It is not just with the WGC-HSBC Champions that HSBC has helped to accelerate golf’s global progress. The HSBC Women’s Champions, one of the most colourful women’s events of them all, has been played in Singapore since 2008, while the Abu Dhabi HSBC Golf Championship joined the men’s calendar in 2010, the year HSBC launched its golf sponsorship in Brazil as part of the countdown to golf’s return to the Olympic Games at Rio 2016.
Juniors also loom large in the bank’s golfing portfolio, with particular reference to the HSBC China Junior Golf Program. The combination of a well-devised plan of action allied to the work-rate of the Chinese children has yielded positively breathtaking results in record time. Recent graduates include Guan Tianlang, who won the amateur medal at the Masters at the age of 14, Andy Zhang, who played in the 2012 US Open at the same age, and Jing Yan who qualified for the 2012 Women’s British Open at 16.
No-one, perhaps, is better equipped to look at today’s game from a global perspective than David Leadbetter, coach to such players as Nick Faldo, Nick Price and Ernie Els.
“We’ve been aware for some time of the talent pool that has existed in the Asian women’s game and now it’s the men’s turn,” he said. “In the ‘70s, the men’s game was all about the US players. In the ‘80s and ‘90s, the European Tour players came to the fore. And today, after a long run of Tiger domination followed by another spell of great European performances, I think we’re almost certainly going to see the next great wave of male golfers emerging from Asia.”
Leadbetter added that nothing had surprised him more on a recent visit to China than the sight of so many young players “with swings so technically sound that they could grace the cover of any golf magazine”.
“Their work ethic and discipline is always evident in the way they set about achieving their goals. On top of that, they display a very calm temperament, always giving the impression that nothing is impossible.”
It was Sir Nick Faldo who, in his playing days, would always take refuge in the notion that, if he missed a two-footer, the 1.billion plus population of China would neither know nor care.
Today, the situation would be very different. Almost to a man, China’s new golfing cognoscenti would politely avert their gaze or give a quiet tut.
Spectators at Sheshan have become more knowledgeable by the year, with HSBC customers marvelling not just at the standard of play but having their eyes opened to world-class hospitality and state-of-the-art spectator experiences.
Golfers, equipment companies and sponsors alike are all locked into the business of improving their performance and, as you would expect, HSBC has no intention of relinquishing its present edge when it comes to visiting new territories and embracing all levels of the game.
HSBC is currently keeping tabs on everywhere from India to Outer Mongolia and, though Neil Armstrong got there first, no-one would be surprised were they to have half an eye on the moon.
For more information please visit www.hsbcgolf.com
Image credit - HSBC Golf