Win a Team in the ISPS Handa Wales Open Pro-Am 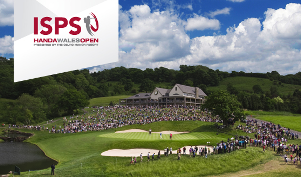 player in the Pro-Am event at the ISPS Handa Wales Open.

Title sponsor ISPS – the International Sports Promotion Society which has a mission to develop blind and disabled golf – has one full team up for grabs in the prestigious Pro-Am which takes place on the eve of the main tournament on Wednesday 28th August.

Teams in the ISPS Handa Wales Open Pro-Am are made up of three amateur golfers who get a rare opportunity to play Celtic Manor’s Twenty Ten Course in tournament condition with one of the stars of The European Tour.

For the first time, golfers now have the chance to win a Pro-Am team by entering as a team of three in an open competition on Celtic Manor’s Montgomerie Course on Monday 12th August. For an entry fee of £60 per team of three (or just £20 per person), golfers will get 18 holes on the challenging and scenic Montgomerie Course and the chance to win the Pro-Am team prize worth £2,000.

Celtic Manor Resort Chief Executive Dylan Matthews said: “This is an exceptional opportunity to win a truly memorable golfing experience and get as close as possible to playing tournament golf. I would urge any golfer who has ever wandered what it would be like to play inside the ropes at a big event to enter this open competition and give it a shot.”

All proceeds from entries will go directly to ISPS to support its mission to promote blind and disabled golf, and make golf a Paralympic sport in the future.

With a prize fund of £1.8m, the ISPS Handa Wales Open has grown into one of the premier events on The European Tour International Schedule. Past winners include Ryder Cup stars Paul McGinley, Paul Lawrie, Ian Poulter, Miguel Angel Jiménez, Robert Karlsson and Graeme McDowell, who went on to hole the winning putt in the Ryder Cup at Celtic Manor in 2010.

To enter a team for the open competition on Monday 12th August and give yourselves a chance to play in the Pro-Am, call the golf team on 01633 410430 or email [email protected]