Callaway Golf celebrate launch of Optiforce driver at The Open

Callaway have kicked off their Open Championship week in style with a speed-themed ‘Monday night at The Open’ party that saw a host of Staff Professionals and VIP guests celebrate the launch of its super fast FT Optiforce Driver, along with its Mack Daddy 2 Wedges.

Over 150 people gathered at The Renaissance Club, neighbouring Muirfield – host venue for this week’s 142nd Open 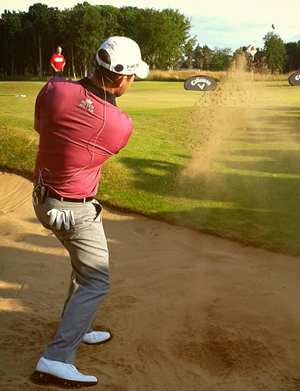 Championship – and were treated to a golfing masterclass as a team of Callaway Staff Professionals – Alvaro Quiros, Branden Grace, Thomas Bjorn, Alex Noren, Nicolas Colsaerts, Danny Willett, Niclas Fasth, Marc Warren, Shiv Kapur and Brendan Jones – went head-to-head in a series of golf challenges.
Guests were also given the opportunity to take on the challenges throughout the evening and put the newly launched Callaway FT Optiforce Driver and Mack Daddy 2 wedges to the test. The Optiforce Speed Challenge was the highlight of the evening, where club head speed was captured and both players and guests issued with speeding charge notices, which were subsequently posted on a Twitter ‘wall of fame’, #optiforcespeedchallenge
The FT Optiforce features Speed Optimised Technology, that features a lightweight head, shaft and grip combined with an advanced aerodynamic head shape that reduces drag by 23% to increase club head speed, providing superior ball speed and distance.
Also in play at this week’s Open Championship will be the new Callaway Mack Daddy 2 Forged Wedges featuring larger grooves for more spin, soft carbon steel for greater feel, and custom sole grind options to provide versatility for a golfer’s demands around the green.
Later in the evening both Media and Retailers had the opportunity to test out the new Odyssey Tank Putters. They are available in short and long options and feature specifically weighted components with a Tour preferred balance point for a higher MOI (resistance to twisting) and greater stability through impact.
Neil Howie, President and Managing Director of Callaway EMEA, said: “It was a real privilege that so many of our staffers were willing to take time out from their Open Championship preparations to put on a thrilling evening for our guests. The banter between the players during the challenges really lit up the evening and goes to show what a tight family we are. Hopefully we will be toasting another Open Champion this Sunday.”
Callaway has a strong contingent of Staff Professionals lining up for this week’s Open Championship including defending champion Ernie Els who also reigned supreme when the event was last hosted at Muirfield in 2002, and last week’s Scottish Open winner and four time Major Champion Phil Mickelson.
For further information about Callaway products, visit www.callawaygolf.com