By: Owen Davies | Tue 11 Jun 2013
Tweet
Srixon staff player and Rolex Ranked World No. 1 Inbee Park, secures her third Major and seventh win of her career at the third sudden death playoff hole with an 18-foot birdie putt at the Wegmans LPGA Championship at the Locust Hill 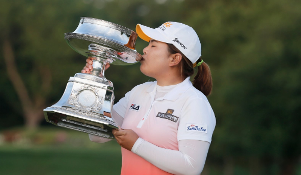 Country Club in Pittsford, New York.
Inbee Park who has won the first two majors of the 2013 LPGA season, having also captured the Kraft Nabisco Championship back in April said, “I mean it was tough to win the second one - Evian, after four years with no win, but after that I felt so comfortable and felt the confidence, and yeah, just really comfortable when I'm in the last group.”
Two in a row…Inbee Park becomes the seventh player in LPGA history to win the first two majors of the LPGA season. She went on to say, “A year ago everything really started to click,” “My swing was getting a lot better, hitting    I think my weakest part of my game was ball striking and my short game and putting has always been very good, and I wasn't really able to hit the shots that I needed to. Starting last year, two years, I mean I started to hit the ball lots better and giving myself a lot of birdie chances.
Inbee Park, has taken the LPGA by storm this season and currently ranks T1 for Putts per GIR, Sand Saves, Rounds in the 60’s and Money Earned for 2013. Park is also ranked in the top 5 of a further 5 LPGA categories including, Putting Average, Scoring Average, Rounds Under Par, Birdies and Sub Par Holes.

Inbee Park - In The Bag

In the Bag - Complete Series