One of the UK’s top public golf courses celebrates its 20th Anniversary in mid-June this year, with a week-long series of events culminating in a beer festival.

Pine Ridge Golf Centre in Frimley, near Camberley in Surrey, kicks off its birthday week with a special “£19.93” green fee on Monday 17th June, marking the year in which the golf course and clubhouse opened fully.

A VIP Golf Day follows on Tuesday 18th, with a Wedding Open Evening on the Wednesday evening and free golf lessons on offer on Thursday 20th June.

On Saturday 22nd June, a blockbuster night is in store with a Michael Jackson tribute act headlining Pine Ridge’s big 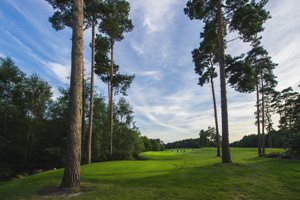 “Pine Ridge is at the heart of the Frimley community,” said General Manager, Elaine Jackson, “and we hope that many locals – whether they love to play golf or not – will join us as we celebrate our 20th birthday this year.”

“Pine Ridge is often held as a shining example of modern ‘pay and play’ golf,” she continued, “and as our doors are open to all we do work hard on quality in all areas. Many staff and countless golfers have combined to make Pine Ridge the success it is, over the last twenty years, so we have gone to town a bit with our birthday week. Plus, it’s the start of summer – so that’s something else to celebrate!”

Businessman, golf club operator and Kauto Star racehorse owner Clive Smith first conceived of creating a public golf course in the beautiful pine forest down the Old Bisley Road back in 1985. He recognised that the picturesque pine-clad glades, part of the 262-acre Frimley Fuel Allotments Charity site, had the potential for a spectacular golf course, and in June 1992 Smith himself struck a tee shot on the 1st hole to declare the golf course open for play, with Pine Ridge Golf Club including the clubhouse officially opening in 1993.

Local golfer Ian Townsend, 45, who has played regularly at Pine Ridge for 15 years, rates the place highly. “It’s a golf course I never get tired of playing,” he said, “and when the sun’s out it has some very pretty holes. The greens have really improved over the last decade, it always drains well after bad weather, and they work hard on the small details which make it a good place to visit. You get a smile from the staff every time you turn up, which makes all the difference.”

As well as an 18-hole golf course, a large Driving Range, a Pro Shop and a popular Bar, Pine Ridge Golf Club sports an unusual extra feature: a six-lane 10-Pin Bowling Alley. The club is also a popular venue for weddings and parties.