This preview was bought to you by My Sports Tips. Who offer insight, opinion and betting tips as well as the best golfing sportsbook deals.

The Lyoness Open (Formerly Austrian Open) returns to the Diamond Golf Club for the 4th straight year this week. Bernd Wiesberger had a fairytale win last year in front of the home crowd. Here are our thoughts on how the course might play and who will feature.

The course was opened in 2000 and is one of the shortest on the European Tour at only 6700 yards. However the amount of rain that is forecast and the recent deluge that central Europe has endured this week means the course may play considerably longer than its yardage.
There is also an emphasis on straight hitting from the tee with water featuring on many holes. Any wayward driving is likely to be punished. The scoring last year was good with the rough not being a factor; this is not likely to be the case in 2013 with the warm wet spring in Europe making for a tough test. 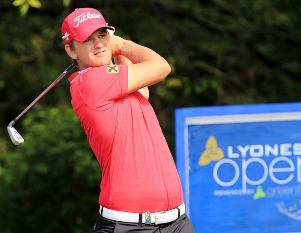 With only three years of play at the Diamond Golf Club there is a limited amount of data to go on, but the event has produced a series of quality winners since its move to Diamond:
2012 – Bernd Wiesberger -19
2011 – Kenneth Ferrie -12 (playoff)
2010 – Jose Manuel Lara -17 (playoff)
Wiesberger won last year giving him his second European Tour victory. The super talented Austrian had a fantastic 2012 and has hit form again with a brilliant weekend display at last week’s Nordica Masters.
Austrian Marcus Brier has won the event on three occasions and past champions Jose Manuel Lara and Mark Davis also line up in the field.

Type of golfer to win

If you are going to pick a winner for either a bet of your fantasy team I would recommend a straight hitter who can take advantage of being in the middle of the fairways and set up a lot of birdie chances. The rough will be lush and thick so anyone who is offline is unlikely to compete. The rough is also likely to prove a factor when chipping around the greens and a player with strong short game should fare well.

Player of the week – Bernd Wiesberger
It is hard to look past last year’s Champion with his stunning weekend play last week and his love the course and support of the home crowd he will feature in the top ten.
Best priced with Ladbrookes at 8-1
Have a great chance – Jose Manuel Lara, Miguel Angel Jiminez, David Howell
Jose Manuel Lara is a past champion at Diamond has the short game to do some real damage to the course. He obviously feels good at this event and despite poor form this year his driving accuracy is up on previous years, it may be this event that turns his year around.
Best priced with Betfred at 150-1
Miguel Angel Jiminez will continue his return from a broken leg and has showed signs of a return to form. He is one of the straightest drivers on tour and loves the shorter tracks.
Best priced with Betfred at 20-1
David Howell is close to winning again on tour, really close. His putting is as good as ever and he now back to his brilliant best, all he needs to do is string four rounds together and he will win.
Best priced with Ladbrookes at 50-1
Go on…have a punt – Andy Sullivan
Andy Sullivan is my outside pick this week. The short tight course will suit his game and is similar to the midlands style tracks that he grew up on. A past Walker Cup player he is super talented and has enjoyed a brilliant start to the year having already secured enough cash for his 2014 playing rights, the pressure is off and a win maybe just around the corner.
Best priced 100-1 with Betfred – Click Here for your £50 Free Bet

This preview was bought to you by www.mysportstips.co.uk  who offer sporting insight, opinion and betting tips as well as the best sportsbook deals.