Following the assessment of his two shot penalty in the second round at Augusta and the world's media analyzing stills and videos of Tiger's illegal drop, many media outlets have been reporting on two images taken by a photographer which seem to show Tiger playing his 5th shot from almost the exact same spot in which he played his shot that hit the pin and screwed back into the water.

This would indicate that Tiger did in fact take a correct drop and may have been harshly given a two shot penalty. However in a post round interview Tiger was questioned again about the drop by a reporter and poured cold water on the whole suggestion that he had made a 'legal' drop:
Interviewer: Is there any chance that you were mistaken when you said you were two yards back, because there were photos that looked like you were in the exact same spot?
Woods: No, I saw the photos.
Interviewer: What do you think?
Woods: I was behind it.
Interviewer: You do?
Woods: Yeah.
Interviewer: So, you’re pretty sure that the two yards is actually …
Woods: One, two yards. But it certainly was not as close as the rule says 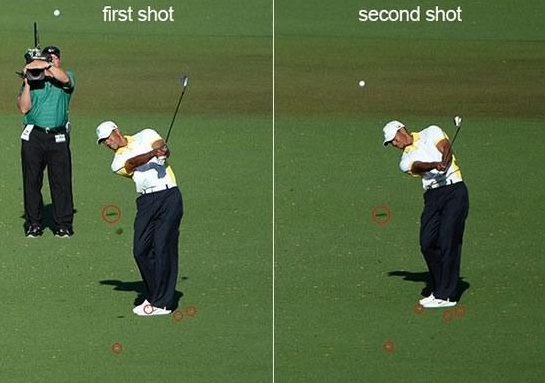 It Seems that is the end of the debate from Tigers point of view, but it is likely we will still be talking about this ruling for years to come.