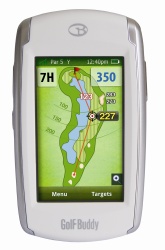 The Golf Buddy Platinum was initially launched back in 2011 and as since received continual updates along with critical acclaim.  Out the box it comes with 40,000 course maps loaded into memory, intuitive software which is accessed via the large full colour touchscreen and the lithium battery provides up to 15 hours of battery life.

Golfshake members Tim, Chris and John recently took the chance to give the feature packed Golf Buddy Platinum GPS device a full test whilst out playing and all were fortunate enough to play European courses.  They all highly rated this GPS device and commented on the ease of use, accuracy and battery power.

Chris & John played La Manga and the Golf Buddy immediately provided access to the courses from the preloaded data already available. With this being a new course the big plus points were the large full colour screen which provided an overview of the course and fully mapped image hole data along with the easy one handed navigation and use of the touchscreen, which was aided by using a tee.

The only real negative points were using the touchscreen with your fingers which could be a bit fiddly but that was easily alleviated by using a tee which that ensured the touchscreen provided a great experiece.

Tim played over in the Algarve and had little time to test out the unit prior to playing golf in the Algarve but commented on how intuitive the unit was and easy to use and was particularly impressed with how the Golf Buddy Platinum handled the complexities of the first course he played that used double greens.

'This was quite an impressive piece of technology – no downloading courses beforehand, they’re all pre-loaded – strolling to the first tee and the course is automatically detected.  The Gramacho is an odd course, it used to be 9 hole but has now expanded to the full 18 but as a consequence seven of the holes either have huge horseshoe shaped greens or two entirely separate ones.  The first in particular has two greens, the left being 290 and the right 320 but as there is a massive rock in the fairway, so initially going for the wrong green can make a second shot virtually impossible.  This is when I discovered that if I selected the green view it gave me the option of left or right.  It continued like this for the rest of the round, easy to use and as accurate as any other dedicated device as would be expected.'

When it came to waterproofability 'The unit is also definately mud and waterproof!  Not only did it manage a round in constant rain (and I mean 2 days for equipment to dry out type rain), it also survived being dropped in a muddy ditch - rather better than my golf shoes did!'

He also found it very easy to use, accurate and the battery did last for 15 hours (three 5 hour rounds) and struggled to fault it on the technical side and similar to Chris and John found the touchscreen excellent although did also use a tee.

There were some minor issues with the clip when carrying but this is easily overcome storing in a pocket and the screen had some marginal issues with very bright light which is to be expected.

All were very impressed with the Golf Buddy Platinum and all reluctant to return back to Golfshakw HQ.