Gulbis withdraws from the latest LPGA event with Malaria

Popular LPGA star Natalie Gulbis has withdrawn form the latest tour event with what has confirmed to be Malaria.The Tour 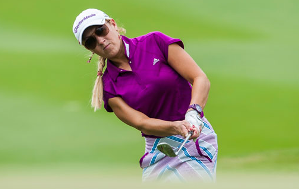 has also offered screening to any players, family or caddies that wish to be tested for the disease.

Statement from the LPGA Tour:

Today, Natalie Gulbis withdrew from this week’s RR Donnelley LPGA Founders Cup as she recovers from an illness that was confirmed to be Malaria. Natalie originally became ill in Singapore and she was treated and medically cleared to fly home. Natalie continues to be treated at home and is expected to be at full strength in three weeks. Natalie’s well-being is a top priority for both the LPGA and IMG, and steps continue to be taken to ensure the well-being of Natalie and all the players on the LPGA Tour now and for future events. LPGA doctors have been consulted and believe she is on appropriate medications, under great care, and her prognosis is excellent. Natalie had been practicing in hopes of competing in Phoenix and will now turn her attention to preparing for upcoming events including the year's first major - the Kraft Nabisco Championship. Natalie regrets having to withdraw from the RR Donnelley LPGA Founders Cup and appreciates their continued support of the LPGA and its players.   Also of note, tournament founding partner Scottsdale Healthcare will be on-site in Phoenix on Wednesday to provide blood draw for players, caddies and family members wishing to be screened.