American Ryder and President cup player Steve Stricker has announced that he is to significantly scale back his tournament commitments and in effect semi-retire from tournament golf. This comes as a surprise considering he is only 45 and ranked the 18th best player in the World. 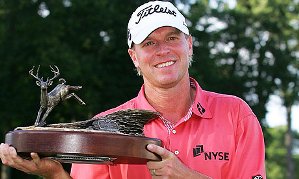 events such as the John Dere Classic.

Stricker may have scaled back sooner, but wanted to prove he could still play following a horrible slump :

"I've proved to myself I could come back,"

"I had a great run the last six years. I think it's just the travel, the time away. When I get home, I'm not there. I'm focused on where I go next. When I do something, I'm in it. I've had enough of being totally focused on golf and my life. And I wanted to not have it be about me anymore.

He went on talk about his decision to scale back and why he thinks it is th right one:

"I'm excited about the year because I finally made this decision to scale back," He said and continued "You know me. I've been this way since Day One. I've never played a lot. I enjoy my time at home, and I've tossed around this idea with my family the last couple of years. Finally making a decision to scale back has lifted a little bit of a burden from me. I'm just as excited to play this week as I've ever been."

And what about that lack of a Major? Well is does not seem to bother him! :

"The coolest part is I'm playing as good as I ever have, I've accomplished a lot of things. I proved to myself I can come back from where I was and I played great for an extended period of time. The major thing is missing, but that's not hugely important to me. I don't have to win a major. Obviously, I'd love to. But it's not going to define who I am. It's all good. I feel like I'm doing this for the right reason.

Stricker is playing in this weeks Tournament of Champions in Hawaii, but we wont see him on the fairways again until the WGC Matchplay at the end of February.

Steve Stricker at The Open at Royal Lytham & St Annes 2012