Battle of the Bibs! Caddies come to blows

It is not what you expect to see when attending a professional golf event, two guys in bibs slogging it out by the putting 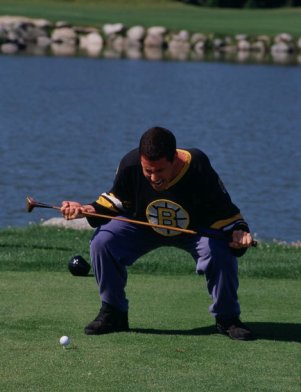 green, but reports suggest that is exactly what happened at the Australian Open toady.

Two caddies, Grant Buchanan and Matt Kelly who carry the bag for James Nitties and Marc Leishman are reported to have thrown punches and knocked each other to floor in full view of both players and spectators. According to reports the argument was the continuation of a dispute that started earlier in the week at a Casino.

Both caddies have been interviewed by the PGA of Australia according to the Associated Press and may face disciplinary action.

“Matt was a good friend of mine, (or) so I thought,” Buchanan said, he went on to say ; “He said some things that offended me and I approached him to clarify it and clear the air, and he pretty much laughed in my face.”

“I regret it but I was put in an awkward situation, I guess,” Buchanan said and continued to defend his actions according to reports he said; “I’m a passionate person and when people say things about myself and friends who I care deeply about, it’s hard. Sometimes people say things and think nothing should come of it. But I just think sometimes people should be responsible for what they say.”