Is Trump good for golf?

Regardless of whether Donald Trump has destroyed a valuable SSSI (special sites of scientific interest) in Aberdeen amongst some of the oldest sand dunes in Scotland, and irrespective of whether he has demeaned local residents of the Menie Estate in Balmedie. Is Donald Trump good for golf?

It would be too easy to condemn Trump for cutting an ugly scar across the socio-economic heartland of the Grampian, a commentary that would be covering old ground. Trump too, has covered old ground (by way of diggers, earth movers and tonnes of sand), and then replaced it with new ground, and seeded it and watered it to make it look like old ground again. 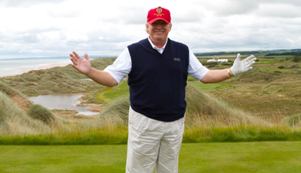 Trump has done this - if a recent documentary is to be believed - with the strong arm of the law there to enforce it.

Elsewhere, Trump hasn't needed to use the boys in blue to build his golfing empire. According to the Trump website Donald Trump is “the foremost golf course developer in the world...committed to creating the finest portfolio of award-winning courses”. He has eleven so far (with two more in construction).

Trump eschews the mundane in golf. For Trump golf must be presented to the highest standards possible. Of the courses Trump has bought most were already well established upmarket clubs boasting superb amenities. When Trump bought Trump National in Washington DC, he promised to completely renovate the clubhouse, expand the dining rooms and upgrade the tennis courts. The story is similar at Trump National, Philadelphia, where Trump enters the scene and stamps his authority by improving already impressive facilities.

But The Donald isn't just pre-occupied with buying up every course he can find with ’Trump’ in its name, he likes to build them too. His latest course, currently being constructed at Ferry Point in New York is designed by Tom Fazio. The others he owns have been designed by legends of modern golf course design such as Martin Hawtree, Arthur Hills and Pete Dye along with Major champions, Tom Kite, Jerry Pate and Greg Norman. The Donald even lends his own hand in design too.

Trump National Golf Club Bedminster is a course The Donald is looking to hold a major event at. Tom Fazio was 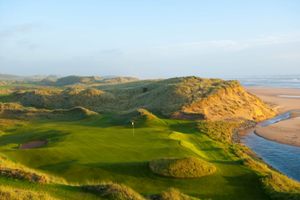 enlisted to design something special here. He's definitely courting the USGA and the PGA. He could be onto something, as the US Women's Open is to be staged there in 2017. Trump has made no attempt to hide his desire for Trump International Golf Club, Aberdeen to be given a leading European Tour event, and no one would argue against that happening at some point either.

Furthermore, The Donald seems to want golf courses to be the centre of everyone's business and social agenda. By expanding and developing dining experience and the other recreational areas of his golf courses (tennis courts, spa, restaurant etc.), The Donald is mirroring the decisions taken by thousands of golf courses across the world who are trying to encourage more income from their golf clubs. Except Trump does it on a bigger and more expensive scale. As he says about Trump National Westchester, New York “This memorable club provides more than a membership - it’s a true luxury lifestyle”.

It's not cheap to be a member at a Trump International golf club. But membership comes with enormous benefits, not least by virtue of the TrumpCard, giving access to a variety of Trump-owned facilities and amenities around the world. Few can afford the $10,000s running into the $100,000s it costs to be a member of Trump's exclusive clubs. Trump's systematic purchase of grand golf clubs with their even more grandiose clubhouses is a continuing mantra that seemingly re-establishes the old days of the haves and have nots.

If golf's elitist perception, grown and nurtured since the 1920s and 30s, has not quite been shrugged off yet, then Trump's continuing expansion of his golfing empire does nothing to alter this standpoint. Yet it's easy to confuse elitism with aspiration.

Golf might still be elitist, there are still certain clubs that don't allow women members, some with extortionate fees and others with the power to 'black ball' any undesirable applicant. However the vast majority of golf clubs, especially in the UK, are not so exclusive. Golf though, is certainly aspirational - golfers aspire to improve their game, covet better technology, want to play the best courses, and desire to join the best clubs. Certainly elitism encourages aspiration, what golfer doesn't aspire to one day playing Augusta National, a club that only this year admitted its first female members.

In its proper context, elitism isn't singularly bad. Rules, traditions and the etiquette of golf are all the descendants of the 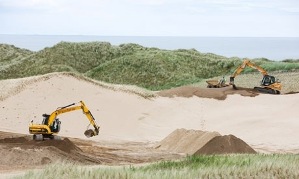 In his quest to build his dream links course The Donald certainly adheres to all the finer ideals of the game of golf. Although his elitism is defined by an enormous super-ego which makes big decisions of consequence and decisions are a bit like people, sometimes they are good and sometimes they are bad.

The Donald decided that he'd quite like enormous mounds of earth constructed in front of some Balmedie homes, just because they were 'too ugly' to expose to golfers. One cannot admire the brute force of this decision, however hindsight is not a usual trait for a megalomaniac. Come to think of it, empathy isn't either. If it were, perhaps he wouldn't have blocked the coastal views previously celebrated, nor would he have barred access to the beaches and dunes, enjoyed by local residents since...ever. For The Donald, the needs of locals are not as important as creating the 'greatest golf course in the world’, and the end justifies the means, every single time.

The Donald has a clear sense of the history of golf – his desperation to build a true links course in Scotland illustrates this desire. Although there is a skewed sense of his priorities for the custodianship of golf, as the rate to play Trump International Aberdeen is in line with the rest of his 'money talks' philosophy and amongst the highest in the British Isles. But if the average golfer cannot afford it, then they'll never know  how good Trump's course is, as one recent visitor noted "you need your 'A' game on every shot".

There are many reasons why the latest Trump International golf course may fail - environmentally, socially, politically or economically - and these have been trumpeted by the media religiously since The Donald first got the locals' heckles up by ploughing his way through the ancient dunes of Balmedie and simply, by being Donald Trump. Though it remains to be seen whether his wholesale disregard for those that oppose his methodology will be grounds to avoid playing and endorsing Trump's golf courses, Aberdeen in particular. But will any potential failure put The Donald off developing and expanding his already impressive repertoire of eponymous golf courses? Probably not, and until he stops investing millions into the game we all love so much - and his investment is the real TrumpCard - Donald J. Trump is, perhaps, after all, just maybe, good for golf, as it surely cannot be that bad to want to finance, build, and develop the best golf course in the world